Friend of FAD Donald Davies previously contributed a page on his Aunt Shirleen Gilbert who owned a music shop in Plowright Lane together with her husband Llewellyn. Donald recently found some pictures relating to her and wonders if anyone can help identify the people in them. He wrote:

Whilst visiting my mother recently I came across an old photo album of my favourite Aunt Shirleen Gilbert. Shirleen and Llewellyn Gilbert resided at Glamis Court on the Berea and owned the Record Bar in PlowRight Lane, Durban Central. A number of Durban luminaries such as Prof. Mike Lang from UKZN and Rodney Harber the architect recalled her the and the Record Bar. I have attached some photo’s from the album and wondered if anyone from the Facts about Durban Website might know the persons in the photos. 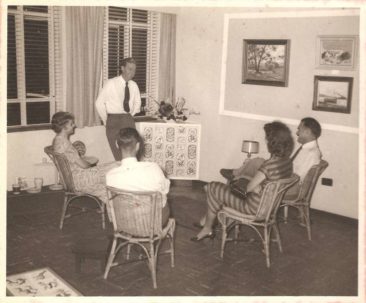 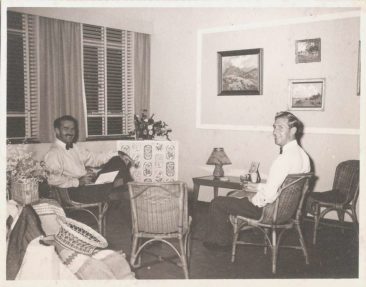 Here’s a query from from Craig Johnston via friend of FAD John Austin-Williams who is  chairman of the South African Airways Museum Society www.saamuseum.co.za and the de Havilland Aircraft Association of South Africa: Craig wrote:

I want to try and piece together the itinerary of Captain Geoffrey De Havilland’s visit to Africa in 1932 – His stops in Africa and dates etc. My idea is to document the trip so the information can be exhibited with the cigarette case.

Geoffrey de Havilland was an aviation pioneer and one of the most accomplished aircraft designers of all time. I hadn’t known he visited Durban and I would be most interested to hear more. I was once lucky enough to ride in a Tiger Moth which he designed.

Natalie Nel posted three pictures on FaceBook of the Colonial Mutual Life Building when it was being constructed. They looked like purposely taken photographs. I contacted Natalie and she agreed to send me copies so that I could post them here on FAD.

The pictures Natalie says are undated and were about to be binned when she claimed them to preserve them. The photos are the building under construction, the building complete and then what appears to be a previous building with Adams and Co as tenants. The CML building itself in 1938 is listed as being at 328 West Street but in 1965 listed as 330 West St. It flanked Mark Lane on the right hand side. 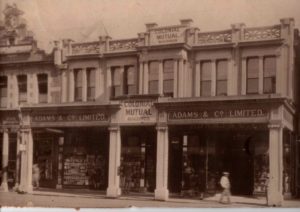 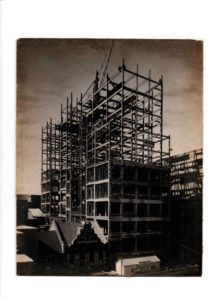 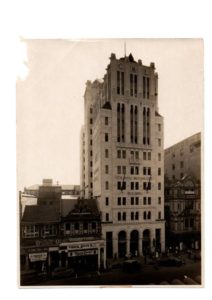 Referring to my 1938 Durban Directory the building of eleven floors was already fully occupied. I searched amongst all the buildings listed and no building had more floors than the CML. I would venture to say it was Durban’s tallest building of the time and probably the first to be constructed of steel beams. The photographs probably date to the early 1930s and if one looks at the pavement there still appears to be some building material there. From my memory, the lift shaft was on the left of the building as you entered the foyer and this would tie in with the picture showing the lift shaft being constructed. END_OF_DOCUMENT_TOKEN_TO_BE_REPLACED

I know many Durbanites who now live overseas do visit this site and I suppose it is appropriate to let them know of developments in the once fine city centre. This article appeared in the Sunday Tribune this past Sunday and it is sad to note that the doors of this fine and iconic Durban building are closing in August. Sad news because the CBD is getting tattier as time goes by. Many CBD building are standing empty with TO LET signs all over them. One worries that they become economically unviable and with rates to pay they fall into disrepair. For old buildings like Greenacres it sometimes is the death knell.
In the same paper there was an article on how Albany Grove has deteriorated and to remind you, Albany Grove runs down the side of the Playhouse. I am sure most Durbanites my age either queued up in Albany Grove to buy tickets or parked their car in Albany Garage for a Saturday night movie. Click on pictures to enlarge. You can also Save the Image to your computer and this will enable you to read the print. 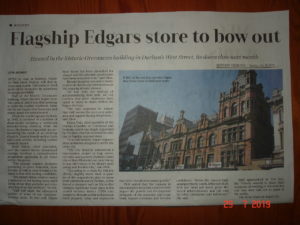 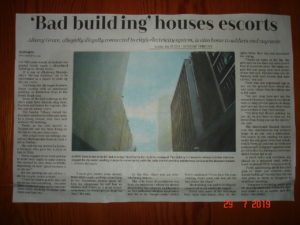 Commemorating the Arrival of the Byrne Settlers 1849.

12th May 2019 marked the 170th anniversary of the arrival in Durban of the vessel, Wanderer with the first boat load of Byrne Settlers. In 1849, 15 Byrne Settlers amongst 108 passengers arrived off the Bluff. Entrance to Durban Harbour was very risky because of the sandbar and instead the preferred method of disembarkation was for passengers to transfer to a long boat and then be rowed ashore to the landing point which was the beach roughly where the ferry and pilot boats dock today. Ladies and children were then carried ashore piggy back style by Africans. END_OF_DOCUMENT_TOKEN_TO_BE_REPLACED

with acknowledgement to Marilyn Poole. Click on pictures to enlarge.

One of the fascinations I have is looking at old postcards and photographs of buildings that once adorned what must have been, a very beautiful Durban. I am thinking about the early 1900s. The stately town centre buildings, the sweeping Victoria Embankment and the graceful homes on the Berea. Sadly most of them are gone now. More’s the pity. Which brings me to the Place on the Hill. 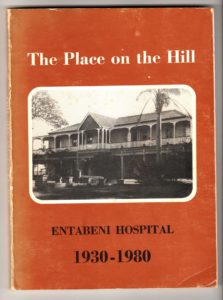 I recently came across a book with the title above which I snapped up being so cheap. It is the story of Entabeni Hospital 1930 to 1980. Entabeni is one of those Zulu names just about everyone in Durban knows mainly I suppose, because it is the name of a hospital and one may have some sort of link to. Maybe born there, was hospitalised there or sadder still, someone died there. END_OF_DOCUMENT_TOKEN_TO_BE_REPLACED

Site contributor Udo Averweg has sent in an interesting article he wrote on Natal Command and the Officer and NCO who were in charge when it closed as a military base. You can download the article (and his others) in PDF format from his page on the site.

Friend of Fad William Paterson is collecting information for a book set in Zululand and Durban during WWII. He wrote:

I am gathering material for the third novel in the Kirkwood trilogy and would welcome receiving very short notes  from people on their experiences at the time (that is, if they don’t mind my [possibly] cannibalising them with due acknowledgements). Focus strictly on Durban and environs and Zululand. Personal stuff, not heroic tales.

There is already quite a lot of material on the site but William would be grateful if you could help with more info he can use to add colour to his book. Please leave a comment below or drop me a line at the address on the contact page.

I wonder how many picked up this Memoriam notice that appeared in The Mercury Friday 5th April 2019. Newspapers these days do not having the large sales that they used to enjoy, and on my part are only occasional purchases. The one I bought on Saturday albeit being a day old, had a very interesting notice which is the subject of this post. 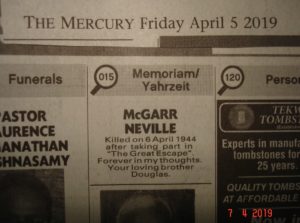 The Second Edition of Allan Jackson’s Facts about Durban has this entry on Durban’s timeline.
“ 1944 On the night of 24th March 1944, 76 allied Prisoners of War including a Durbanite and ex-Glenwood High School pupil, Neville McGarr escaped from Stalag Luft III prison camp in Sagan, Poland. This became to be known as The Great Escape. Fifty of the escapers, including McGarr were executed by the Gestapo on being recaptured. Only three of the 76 eventually reached safety.” 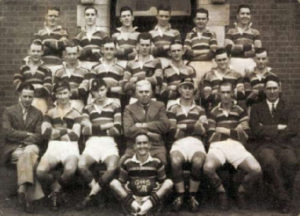 In his book “The Great Escape” written by Paul Brickhill in 1951, the authors writes in his preface:
“ Several years have softened the memories but they have not faded. Nor, I think, they ever will. This is the first full account of the greatest prison-camp escape of them all.” The film made of this event in World War Two remains one of the best ever made.

I did a bit of research on the escape and have the book but found the book lacking in some detail and is not definitive. In retribution to the escape and the enormity of it, the Gestapo were ordered to kill 50 of the escapees that had been captured although the majority were officers. After their execution by firing squad details, the bodies of the men were cremated.

The memorial to the 50 escapees executed.

The newspaper memorial is a reminder. Lest we forget. 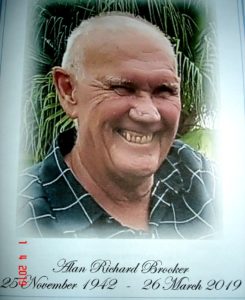 There is mention in the Cookie Look post on this site of Alan Brooker being the leader of a well known 1960’s Durban rock group called The Knights. Sadly on Saturday, I attended his funeral. Alan passed away after a long sickness. He was well known amongst the musos in Durban and post this for general information. Below is the link to the Cookie Look posting. https://www.fad.co.za/Resources/memoirs/cookie/Brian.htm

I managed to down load images of a Parlophone LP that the band produced. I noted that an old friend of mine Billy Gaugain was the drummer for the group. I knew Billy through the Durban Regiment and if my memory serves me correct he played for a band called A Group called Blue. The Knights consisted of Alan as Lead and Vocalist, Paul Janssen and Dennis Scott-Williams guitarists and Billy, drummer. 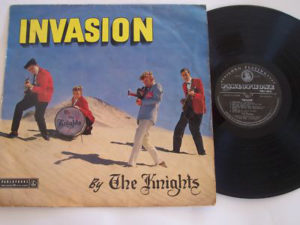 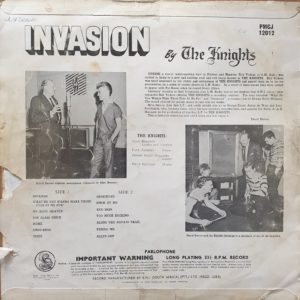