My memories of Christmases going back to my pre-teen years are not bad.  It would be just about now, a month before Christmas that our family, my Mother, sister and I would accompany my Uncle and Aunt and their three children, on a Saturday early evening stroll through town to see what the shops had on display and on offer.  My Uncle had a rather small 4 seater car then and the 8 of us would cram into it for the trip, the smaller ones sitting on laps.  We used to park in West St just beyond Broad St. Getting to West St we were all in wonder of the coloured lights decorations put up by the Durban Corporation Electrical Dept.  Stretching from Broad St all the way to Gardiner Street, the whole of town was transformed into a wonderland of lights and colour.

Our first direction was not down West St but upward towards an Indian shop called Bombay Bazaar.   The lure of that shop was that both my Mother and Aunt had grown up in Alexandria Egypt and the goods the shop had, reminded them of the bazaars in Alexandria. Being Saturday evening all the shops were closed of course but you could peer into the shops quite easily.  From there we turned around and head down West St. 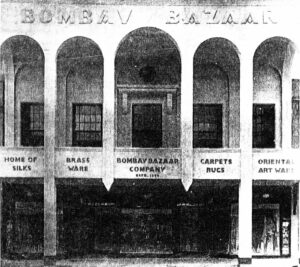 At the corner of Broad and West Sts was the Polar Bar selling ice cream.  Here ice cream cones were bought for all especially as pacifiers for the smaller children. 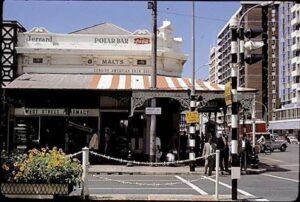 From there onward cursory stops were made along the way and one of the first was Colombo Tea and Coffee where we would look at the lovely Chinese tea sets on display. I wonder if many know that there was another separate business upstairs accessed by a narrow staircase at the back of the shop. Coffee was a big thing in our families and this rather small shop was the only source for our coffee supplies. I can still recall my Mother’s regular order I had to buy.  Quarter pound Kenya A Turkish. (2.2 pounds = 1 kg.)  Turkish referred to the level of grind applied to the beans.  The beans were first weighed, and then ground. The grounds fell into a scoop and were then put into an orange and brown paper packet, settled by banging on the counter and the packet folded over and sealed with sticky tape.  You left with the coffee still warm and aromatic.  In later years this small shop became famous in Durban as the owner refused to sell out to a big developer and everything around the shop was flattened. Thanks to his tenacity the little shop survived alas today no longer a tea and coffee shop.

Colombo Tea and Coffee standing alone with everything around flattened. 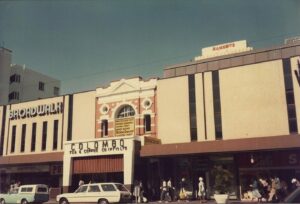 Back to our walk. The first shop looked at was John Orr’s which I recall did not have much in the way of toys.  A large department store we never really bought much there bar dress material. They had a whole section of the shop just material rolls. It is interesting to remember that in those days my Mother had a “personal” dressmaker by the name of Alice. Her dressmaking business was in Valbro Chambers in Victoria St. Alice made most of my mother’s and sister’s dresses. I would accompany my Mother to her fittings and it never bothered her going to “that” part of town.  I still recall Alice’s workspace being rather cramped with her orders hanging around the walls.

Continuing next we came to the Hub and this shop did display its Christmas toys.  The Hub bordered on Greenacre’s Passage and the display window in the Passage was overfilled with just toys and gifts.   You would see kids noses pressed to the windows and index fingers sternly pointing out the desired item. Town would be surprisingly busy with many families taking a stroll and from here on we had to keep an eye on the smaller girls.  They had a tendency of wanting to run ahead.  Next door was Greenacre’s, different then in that the shop entrance was set back between the pavement and the shop front itself. This open area had wood and glass island display cabinets apart from the normal shop windows. Here the children played Hide and Seek hiding behind the island cabinets, darting about and calling one another. Greenacre’s would put on a lovely display; sometimes an animated Father Christmas complete with his sleigh and reindeers on display in the main shop window.  The next large shops, all adjacent to one another, were Bon Marche, the OK Bazaars and Stuttafords.  The OK always had a grand display of Christmas stock. Their prices well suited most families and the shop did a roaring trade at Christmas time. Remember their slogan….OK Bazaars! Where South Africa shops! Bon Marche, a smaller department store was quite popular but carried a smaller selection. Then Stuttafords always considered an “upper class store”.  As you entered on the right and central were the cosmetic counters of all the leading brands. I think they had the most attractive group of beautiful and elegant cosmetic sales assistants. Their faces made up to the nines and wafting perfumed aromas as they, in their pencil skirts and high heels strode around their individual counters.  It was grace and elegance combined. Stuttafords was a big department store, stocking the finer brands and well known for their range of fine crockery, glassware and cutlery sets. Cannot recall the other shops doing it but at Stuttafords, if getting married you could leave a list of what you wanted as a wedding present as far as specific crockery and cutlery sets. As for toys, theirs was more select items.  Then across Field Street intersection for my Mother and Aunt to go and have a look at the latest shoe styles at Cuthbert’s.  This Cuthbert’s I remember was an odd shop in a way because the men’s shoe department was in a basement area below pavement level.  One feature of this I recall was that on the pavement were glass translucent paving bricks which allowed daylight into the basement of the shoe shop.

I used to sneak away here and run off to go and have a quick look at J F King.  Every year at Christmas time, King’s put up a small operating model railway display in their shop window complete with buildings and scenery. They were agents for Fleischmann Model Trains.  I always wanted an electric train set but circumstances then simply did not allow so I would just look at it and dream. Then I would run back rejoin the family and we would cross West St and start walking up the other side looking at Woolworths and Henwood’s.  On the corner of West and Field Sts. was the ABC Shoe Store and then Anstey’s with their Christmas display.  Then other smaller shops until we got to Payne Brothers.  Their display was always top notch.  In those days there were jobs called “window dressers” and the big firms employed them to show off the shop’s wares. The window dressers excelled in their craft.  I am sure the various shops’ window dressers were all in competition with one another as window dressing was top notch.   Beyond Payne’s were various smaller shops. One was the CTC Bazaar, which was a popular no frills shop with a very plain interior.

We were now nearing where we had started. We would pass the Roxy Bio Café, sometimes with a queue waiting to go in.  I will admit I did go to the Roxy and the other Bio Café’s in my time.  It was an experience. Frowned upon from some quarters as being “bug houses” they were harmless and a deviation for something to do especially during boring school holidays back then.

Finally with the girls getting tired it was time to return home.  We would all clamber back into the car and depending on how my Uncle felt we would do one circuit right down West Street, turn left into Marine Parade, along and down to the Lower Marine Parade, a slow drive along this stretch,  back to West Street and off home. 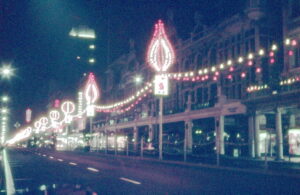 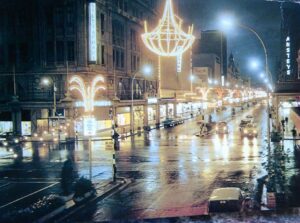 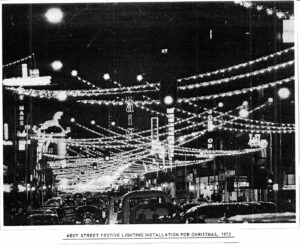 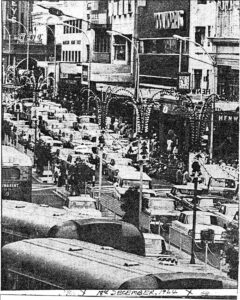 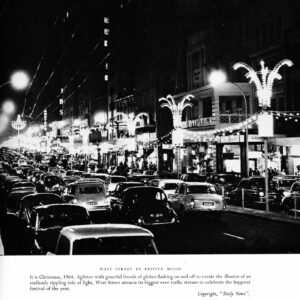 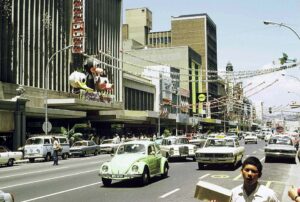 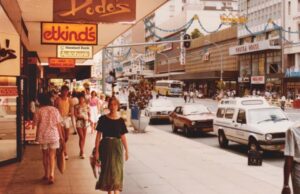