This week’s Pot Porrui is mainly pictures and less notes. The reason being I do not know many of the pictures shown and have to reckon where they are and what stands in their place now. 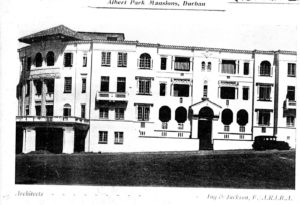 I cannot say I remember the building but from a directory it stood on the corner of the Victoria Embankment and Russell St.  Demolished in 1960s and replaced by a block of flats called Ogwini. 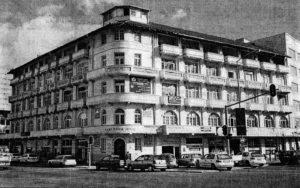 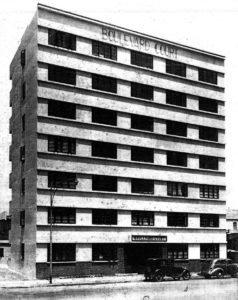 Built late 1930s.  Location 3/5 Winder Street.   I knew someone who lived in Winder Street and at the time, this was some years ago, it was a bit dodgy.  I think it is still that way now. 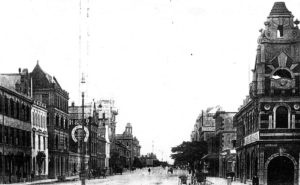 The building on the right identifies its location as being Field St. See street name above the arch.  This building was the Royal Exchange Assurance Building. If I have my orientation right then we are looking at Smith St towards the Louis Botha statue.  In which case the building on this corner today would be the General Accident building which replaced Yorkshire House.  Next door would be the Smith Street side of the OK Bazaars. 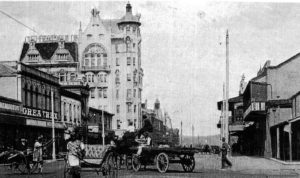 Field Street looking at the Bluff in the distance.

The tall building on the left would be Standard Bank ABC Branch with the Cuthbert’s Building next to it on the left.  That is on the intersection of West and Field Streets. The low building opposite eventually became the Johannesburg Building Society (JBS) building.  This must be a very old photo 1900s noting the ox wagons. The buildings on the right look a bit ramshackle and I was trying to remember what would have been there in the 1960s.  There was an ABC Shoe Shop on the corner of West and Field and then a shop called Natal Hatters, then another building with an exclusive  furrier shop, Manock’s.  Also here was Gerays’s Studio, the photographers, the Natal Daily News Building, home of the newspaper and the Globe Hotel.  This stretched to Pine Street and if you recall you could look down into the basement of the Daily News building on Pine Street corner and watch the printing presses in action. 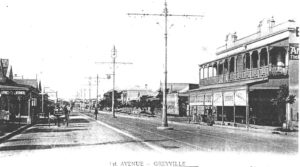 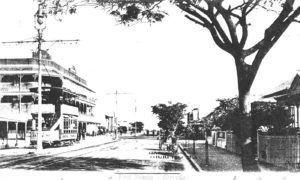 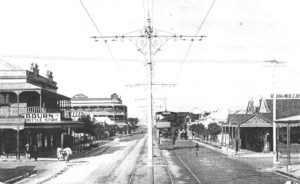 I cannot date these but again I would say circa early 1900s. Durban’s Electric Trams started running in 1902 so that gives a date to two pictures. Note the Bourn Bottle Store in two locations unless they moved from one to another.  Two pictures show the same building which appears to be King’s Hotel.  The only old hotel I knew in First Avenue was Ranch’s Hotel (66 First Avenue).   Perhaps the King’s Hotel became Ranch’s?  The name Bourn Bottle Store does ring a bell and I seem to remember one near Linze Road but not sure. One would need access to an old directory to unravel where these locations are but unfortunately I do not have one. There are enough clues though. 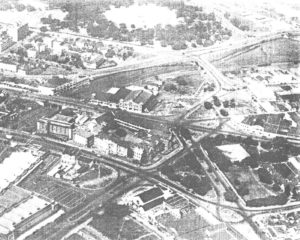 The next picture is an aerial picture of lower West and Smith Street looking down on the Natal Technical College.  I knew the area having lived around there for a short while in the mid-50s.  This is a photo before my time judging by the fact that I do not see the Alhambra Cinema.  Anyone remember the EP & Commercial Printing Company in Smith Street?  It is in the picture. Also one can see the railway line heading for Umbilo and the main line to Pietermaritzburg.  Another big firm in the area was C. Argo. There are the Municipal Market Halls as well as the Albert Park Oval.  If you have a sharp eye I think I can see the Louis Botha Statue standing alone in those days. Not a very clear picture overall but an interesting one working out what streets are there. 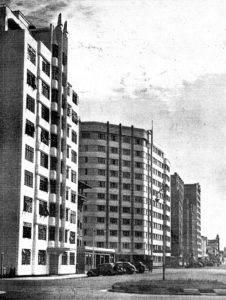 Picture taken I would guess mid-1940s. The building on the left is Broadwindsor one of Durban’s Art Deco, next door you can just make out the Plaza Hotel jutting out.  The big block of flats is Manhattan Court. Next to Manhattan Crt is Plymouth Hoe. Next St George’s Street.  Next are Nordic Court and Broadway Court.  I may be wrong but I think most of these buildings are still standing. 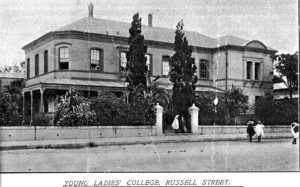 I have absolutely nothing on this building and where it was located in Russell St. On the back of the picture is noted “1906”.