Next year 2012, will mark the 50th anniversary of the inception of Active Citizen Force training as it was then known.  It would be for many 18 / 19 year olds, the start of 9 months full time military training.  The first contingent of Durban boys left Durban Station probably just after New Year’s Day, 1962. Although not the only training base, 1SSB or 1st Special Services Battalion at Tempe,  Bloemfontein would be the base where the ballotees from all over South Africa would gather to start a sojourn no one knew very much about.

Durban at the time had two regiments based in the city. The Durban Light Infantry ( the Royal had been dropped) and a relatively new regiment, the Durban Regiment.  I was allocated to the Durban Regiment and called up for the second contingent which left Durban Station on 1st April 1962.  Every three months thereafter another contingent would be leaving the City.

At the time that I knew very little about the Durban Regiment. Initially during the 9 month period, one’s regiment was irrelevant to an extent as we were all designated as South African Infantry. There were those who were allocated to the Technical Services Corp,  the Admin Section, the Medics, the Navy, Air Force, Tank and Artillery units  etc. who did their basic training at their respective bases but the majority were drafted into the Infantry.

Although I served with the Durban Regiment for 4 years, 1962 to 1966, I never did find out about its history. I have found the following on the internet:

“Established in 1923 as the Durban Volunteer Guides, the unit was disbanded after World War Two but reformed on paper in 1959 as an armoured infantry unit.

The unit hastily formed and deployed to Cato Manor for Operation Duiker in March 1960 to help “restore order”. The DR provided troops for the Namibian war from 1972 to 1982 and did service along the Natal border from 1982 to 1984. From 1985 to 1991 the unit was involved in counterinsurgency operations in various townships between Margate and Stanger.”

Perhaps those whose interests are facts military could add more about the two regiments in the city, the DLI and the DR.

Below is the Durban Regiment’s insignia, an eagle against a sea shell background and the motto Pugna Celeriter which translates to Strike Swiftly. 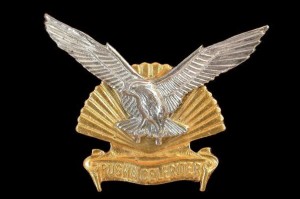