I was going through some of the pictures and realised that some reminded me of past memories.

I decided to use that as a theme.  So join me in my nostalgic “walk down my memory lane”.

Perhaps you can relate to them as well.

On my second return to Durban in 1954, then to live permanently, I resumed my schooling at Marist St Henry’s where I was to remain till leaving in 1961.  What a change this was from the quiet and sedate Dominican Convent I was at, to a boisterous boys’ only school.  Never before had I heard of the word “flaps” (aka cuts aka caning) and to see it dished out in front of you.  Lady teachers as well, wielding rulers on out stretched hands.   But we all lived through it.  Here is a picture of the old school as it was originally. The school actually started within this building. The property known as The Maze was purchased by the Marist Brothers circa 1928 and the school opened in 1929. It was originally the home of David Don, a leading Durbanite in his time. 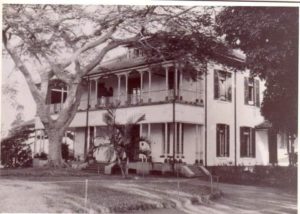 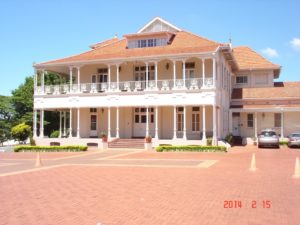 Part of my early school days.  There were three ways one could get to St Henry’s.  The Manor Gardens motor bus dropped you at the school gate, the Nursing Homes motor bus left you with a casual level stroll to school, and the Glenwood trolley bus. The first two were the way to go in the mornings as both routes regularly served the two hospitals in the area, the Sanatorium and Entabeni.  The regular early morning schedule took hospital nurses to work and boys to school.  In the afternoons both these motor bus services were rather sparse, although there were Manor Gardens buses coinciding with school out times.   The Glenwood bus was a schlep to use in the mornings as it meant a steep upward climb of MacDonald Rd to get to the school.  In the afternoons it was a better option. Down the hill to the terminus and an interesting ride into town on the comfortable trolley bus.  Inevitably with your school mate who lived near you and you would be chatting down the hill and at the wait at the terminus.  It was a part of my school days.

I have no connection to the iconic Marine Hotel but the picture reminded me of going on the Bay with my father and sister on the Sarie Marais.  It was something that we did as an occasional afternoon weekend outing.  That’s the end of Gardiner Street in the picture and the location of the Dick King Statue.  Opposite the Marine was the Twines Hotel both of which have long gone. 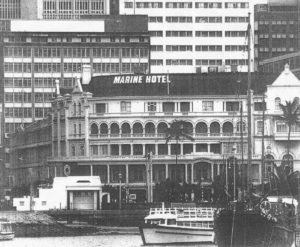 The subway is still there,  and recall my sister complaining of the smell and damp inside.

Aeriel view of location of the Dick King statue 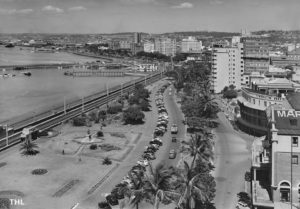 Here I am with my aunt and my cousin at the Dick King statue in 1950. 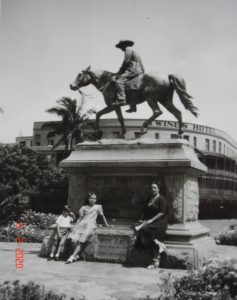 For a few years we lived in one of the small roads off Moore Road and then later moved to Mansfield Road.   Both places were close to Berea Road so it became familiar to us. Remembering back, the left hand side of Berea Road (heading for the Toll Gate Bridge) was commercial with many varied shops, tearooms, bazaars, chemists, shoe shops, book store, The Grand T Room.   The right hand side was mainly residences and blocks of flats until the bottom end near the Alvin Cinema.  It was a two way road then, with a wide central grassed island. The trolley buses went up as far as the old Toll Gate Bridge, crossed over it and returned down the other side.   Still recall trudging up to the top of Berea Road to go and visit a “young flame”.  Friday evenings my Mother, sister and I would walk round to Moosas and do an evening shop looking at materials, net curtaining, clothing etc.  The shops were well supported by Durbanites, the concession being they closed for Mosque between 12 and 2 pm so they were allowed to stay open from 5 to 7pm.  Moosas and other shops today. 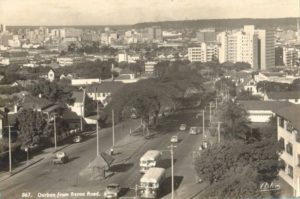 Friday evenings my Mother, sister and I would walk round to Moosas and do an evening shop looking at materials, net curtaining, clothing etc.  The shops were well supported by Durbanites, the concession being they closed for Mosque between 12 and 2 pm so they were allowed to stay open from 5 to 7pm.  Moosas and other shops today. 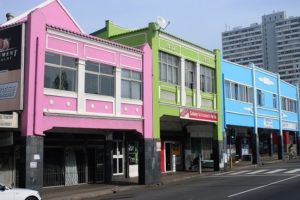 Sunday Mass at the Cathedral

The Cathedral when it was relatively new. 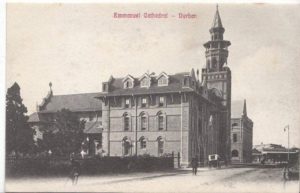 In the early 50s there were very few Roman Catholic churches in central and suburban Durban.  The Cathedral serviced the whole of central Durban and Sunday Masses were said on the hour every hour from 6 am to 11 am.  My late sister and I would attend the 8 am Mass, walking from Moore Road (looking back quite a long way)  but returning by the Toll Gate trolley bus  which we caught at the Chix Furnishers opposite the West St Cemetery.   I can still recall we left home with about 2 shillings (20 cents) given my sister.  Sixpence  each for the collection plate, four pence to buy the Sunday Tribune after Mass,  four pence to cover our return bus fare and four pence change. We must have left home just after 7 am and walked down Moore Rd getting to Umbilo Rd where we turned left and headed for West St.  Along Umbilo Road we passed the corner tearoom, Wynberg Tea Lounge, Modern Gowns, Makan’s Shoe Repairs and  Escombe Court. Then on the corner of Umbilo and Berea Rds. was the new Williams Hunt Car Showroom. Here we crossed Berea Road and walked past a cycle shop getting to the Alhambra Cinema corner.  My sister would stop to see the pictures of the film stars on road side display cabinets.  We crossed Warwick Avenue with the Tech on the right, headed past Jimmy Green Furnishers, over the bridge to Funeral Parlour Central… all the funeral parlours were gathered here, Doves, Adlam Reid, Wilson, Davey and Dunham.  Past the old Royal Theatre still in operation then, Park Street on the right and down past the West St Cemetery gates. Left into Cathedral Rd, Ellis Brown Coffee on the right and through a narrow gate into the Cathedral grounds passing a small mausoleum dedicated to the founding  priests,  amongst them,  Father Sabon. 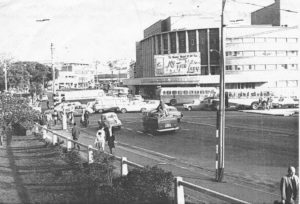 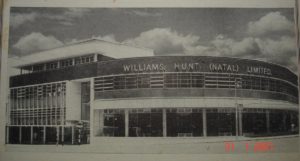 Here come the Vaalies . Remember that saying?   I well remember my cousins who lived in the Far Western Transvaal whose family would travel down to Durban during July holidays and more often than not stayed at the Killarney Hotel.  I was always told that they would be coming down and it was a done thing to meet up with them and spend time together going around Durban.  They had a 1948 De Soto motor car and had the distinction of having the number plate “TR 1”.  Always remember the Killarney, as it was very popular and its lobby used to be like a railway station. 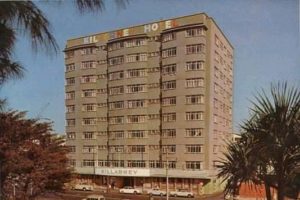 In the past there were two places I always remember that reminded me Durban was not far ahead.

Especially so when I had my own transport. The first was the 45th Cutting Caltex Garage which was there even before the freeway was built.  Heading west to Pietermaritzburg, one would come up Berea Road and divert to the Old Main Road which wound up via the Mayville Hotel passing Sherwood and the Caltex garage. This all changed when the freeway was built but one can still go the Old Main Road way. The second marker was the old Toll Gate Bridge again before the Kinmont Canyon was built.  As you came over the hill and under the bridge, you could see Durban and the sea ahead of you and you knew home was not that far away.  During my days in the Army and training in Johannesburg later, those were the two landmarks one always appreciated. Sadly both I show in pictures are now no longer. 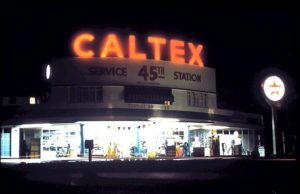 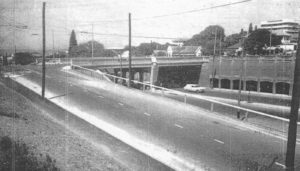 The old bridge across Berea Road.

This is another memory that has been demolished.  In later years when the group I went  around with started dating, seriously and not so seriously, and having our own transport by then, we made the Broadway Hotel  upstairs verandah our gathering point.   Wherever we were going out together in town it was our standing arrangement that we would meet there beforehand.   There were no cell phones for instant communication then so it was a matter of sit and relax and wait for the latecomers.  Today the new Central Methodist Church sits on the corner so our rendezvous, the movie houses and the Saturday night hub bub we overlooked, have all gone. 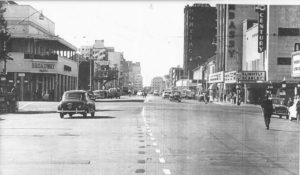 Look behind the Balmoral Hotel and you will see a tall building with what looks like stripes running vertically downward.  That is the new Beach Exchange Telephone complex and the “stripes” are actually narrow windows which ran from the first floor to the top floor. I was closely associated with this building in that when it was about 95% complete, I was given the task of overseeing the handover of the building on behalf of Telkom from the construction firm, Silvermine Construction circa 1974. My main task really though was to oversee the installation of the Beach 37 Telephone Exchange.  The exchange was built by the firm Siemens (Munich) and was a replacement exchange for the two old Durban Corporation exchanges (numbers beginning with 2 and 6) in Pine Street which had come to the end of their sell by date. The two old exchanges had been in operation since the mid 1920s.

The Beach 37 exchange serving 10 000 subscribers came into operation in April 1975. Another exchange was built thereafter, Beach 32 followed by a second trunk exchange for Durban.  I stayed at the building for over 15 years during interesting times.  Today all the exchanges that were installed have now been removed and replaced by electronic exchanges and the building I would presume is virtually empty and underutilised.  The Marine Parade Post Office was at ground level in Seaview Street. 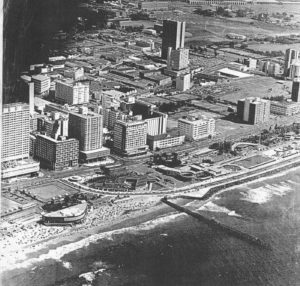