The Post Office originally the Town Hall.  Part One.

If you were born pre 1960 you would have grown up in an era when the Durban City Centre was in a way more part of our lives than we give credit for.  It was the place where many worked on a daily basis, most Government Depts. were centred in it, commerce and retail shops were widespread within it, medical practitioners and services were abundant there,  the station was there,  the trolley and motor buses had their termini there, speech, dance and music academies abounded. It even was the place for family entertainment in the cinemas and hotels.  Sadly today the CBD is no longer what it used to be and I doubt if it will ever regain the vibe it once generated.

Perhaps one of the most well-known buildings in the city centre was the Post Office.   One grew up knowing the Post Office building, where it was and what its business was.  Today I understand that the Post Office building has been closed and is no longer in operation.  It would appear that parts of the building are condemned as unsafe.  I doubt if many, if any of the current younger generation born post 1970s have ever put a foot inside that building.  What a sad end to such a historic Durban building.

I chose to write up about the Post Office building formerly the Durban Town Hall as there were quite a few interesting photos in the lot given me.  This will be a resume of the building in its original function as Town Hall.  Town Hall because Durban had not yet attained City status.

By 1880 Durban had been in existence for just over 50 years.  It had grown immensely and there was a need for a decent building to house the city council and other offices to serve the general public.

As was the method of the time, the design of a Town Hall for Durban was the subject of an open competition.  The design accepted was that of a British architect, Philip Dudgeon. Construction started circa 1882 and the foundation stone was laid by Sir Henry Bulwer in 1883. Bulwer was appointed Lieut. Governor of Natal of Natal in 1875 when Natal was a district of the Cape and later became Governor of Natal in 1882 when Natal became a separate colony. 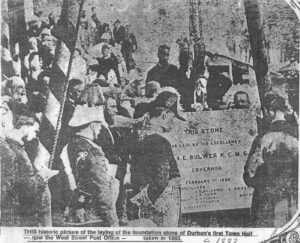 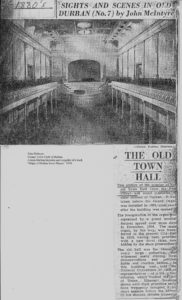 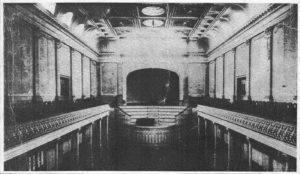 There are very few photos of the original interior of the Post Office as built. This is the interior showing the stage with the archway above it. On either side are raised balconies. Note the ornate ceiling. 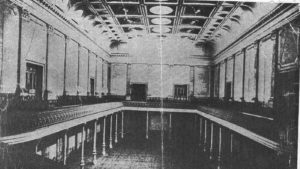 The hall interior showing the opposite end. I do not have a floor plan but having been to the Post Office after a major renovation it would appear that length wise the hall was parallel to West Street. In other words you did not walk up the outside stairs and into the hall as such but entered in a central side door with stage to one side and the opposite end to the other side. 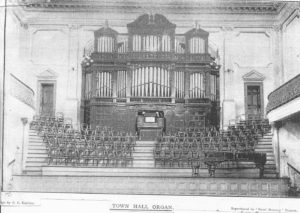 The Town Hall organ built in to the stage area. Note the added doors left and right built into the original blank niches. This pipe organ was eventually relocated to the new Town Hall when the building was sold. 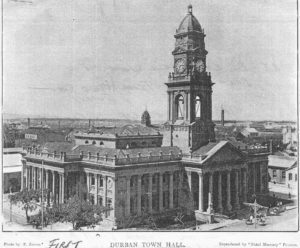 An elevated view of the new Town Hall showing what I would say is the roofing over the hall. On the left Gardiner St and on the right Church Street with the small building being the original reading room later library. 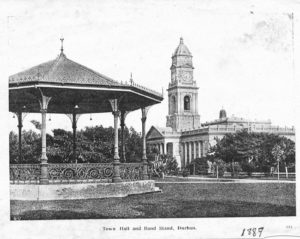 An excellent picture of the recently completed Town Hall with a bandstand in the adjacent Town Gardens finely decorated with Victorian “broekie lace” and cast iron moulded pillars.

He had just escaped from the Boers who had held him in captivity in Pretoria. He was captured on Nov 15th when the armoured train he was travelling on was ambushed at Chievely between Estcourt and Colenso. The enthusiastic crowd meeting Churchill carried  him to the steps of the Town Hall where he addressed them.  This event was  marked many years later with a memorial plaque mounted on a stone pillar erected in the garden on the right hand side of the main town hall steps.  See newspaper article below. 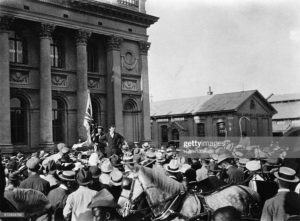 An actual photo of Winston Churchill addressing the Durban folk. 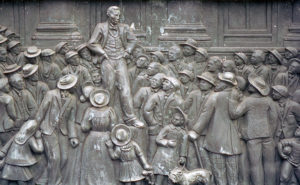 The plaque remembering Churchill’s address to the crowd 1899. The sculptor was Mary Stainbank. 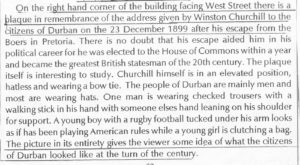 Notes on the plaque 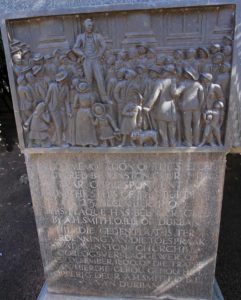 The original Churchill plaque on the pillar.  This stood in the open garden on the right of the main steps. 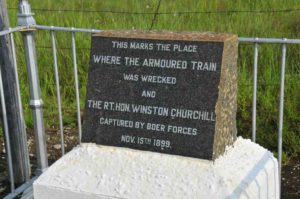 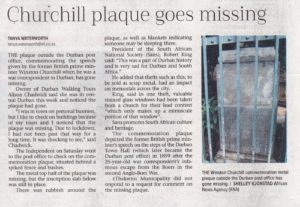 Newspaper article re theft of plaque.  Note the memorial is in a barred cage

From Oct 12th to Nov 5th 1908, the Town Hall was the venue for the National Convention.  This convention paved the way for the unification of the four provinces into the Union of South Africa in November 1910.

The Town Hall remained as such till 1910 when the new, grander Town Hall was opened. It would appear that Durban outgrew the old Town Hall and the Town Council decided to sell the building to the General Post Office for the sum of £17 000.

When the GPO took over the building it was extensively modified to accommodate the Post Office’s needs. The Main Hall was also demolished as there was no need for a hall of this size. The large pipe organ was removed and relocated in the new Town Hall where it remains today.  Unplayable I hear! 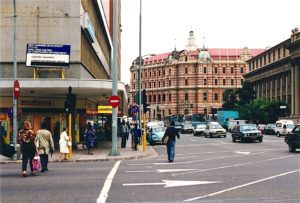 The only picture I have of the extension added to the rear of the Post Office in 1926. The lovely station building in the background with the station platform roof still “attached” to the main building. On the right the old Natal Bank building having been demolished is replaced with the FNB building.

In 1926, the GPO took over the property behind it which faced Pine Street.  A large extension was added which copied to an extent the original style.  This building was built with a large internal  open square where postal delivery vehicles could load and unload.  At this time an underground tunnel was dug between the Post Office and the Railway Station across the road. This facilitated the movement of mail bags between the two buildings as the majority of post was initially carried by rail to distant locations. 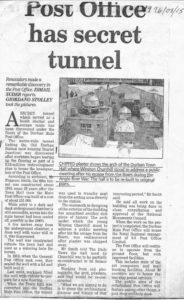