A bit harder this week with an easy one thrown in.

Picture 2. Where was this?

Picture 3. What hotel was this?

Picture 4.  Where and what was this?

Picture 6.  Where is this tram? 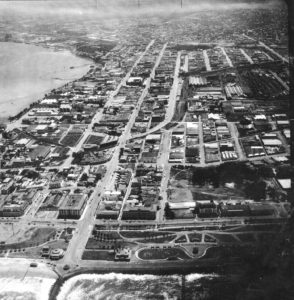 The missing building is the Edward Hotel on the Marine Parade.   Front of picture the wide road is West Street.  To the right the old Beach Hotel before that was demolished and rebuilt in the mid/ late 50s.  Then the Balmoral Hotel, Seaview St and an empty plot.  That was the site of the original Edward Hotel built, circa 1911. The other picture I posted of the Edward Hotel is the one that stood on this site and was demolished to make way for the new Edward we all knew. Unfortunately I have no books that date buildings so I have to go by reckoning. The new Edward was built early 1930s I think but if someone has a definitive date that will help. The date of this picture I would guess as late 20s / early 30s. I base this on a previous Pot Pourri concerning Hollywood Court which was built 1938/39 and if you blow the picture up you can make out the City Hall and Aliwal Street but no Hollywood Court yet in Smith Street. 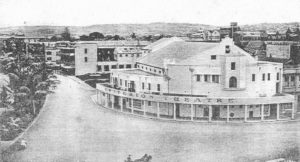 Criterion Theatre corner Field Street and Esplanade.  Before my time but there is a note “opened in 1912”.  I have a problem as to when the Criterion was demolished as it does not appear in a 1957 Directory and in 1965 indicated as Bay Towers under construction.  So what was on the corner  between the demolition of the Criterion and the building of Bay Towers? Bay Towers like the Criterion took the rounded corner shape. I show a more modern picture with Bay Towers partly visible on the right hand side.  pyc 2 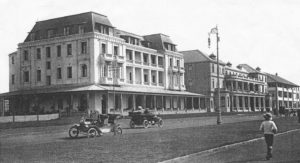 The original Edward Hotel with a note “opened 1911”. This is a classic photo showing the Marine Parade newly laid out following the removal of the mountainous sand dunes that existed.  I would say the Beach Hotel on the corner of West St and Marine Parade has the honour of being the oldest hotel on the Beach front.  The three shown is the Edward , the Fern Villa (later name changed to Majestic) and the Ards. Of the three shown, the Majestic lasted the longest.  Referring to Pic 1 it was this Edward Hotel demolition that left the “missing” gap in the photo.  Remarkably clear photo. 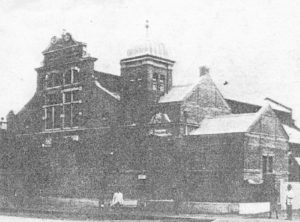 This one must have had many flummoxed but I notice some were spot on.  It is in fact the Town Baths circa 1893. It was located in West Street roughly where the City open air baths were situated.  However these baths were enclosed and included Turkish Baths.  From an associated notice these baths provided a salt water swimming bath but one could also indulge in hot fresh water at 1/- (one shilling / 10 cents) or hot sea water baths 1/6 (one shilling and sixpence 15 cents ) per session.  Mondays and Thursdays the baths were reserved for Women only.

Unfortunately this picture is not too clear in reproduction.  I attach a photo of the interior of the enclosed Town Baths.  Separately a price list. 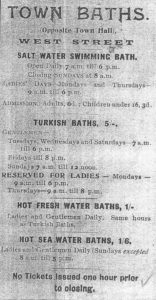 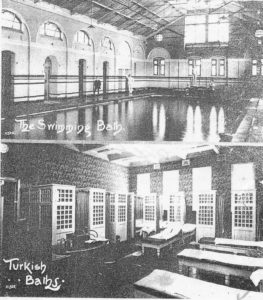 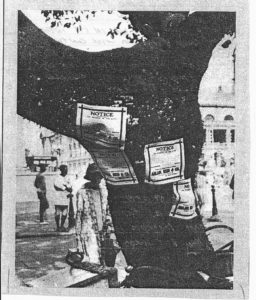 Most Durbanites will have one way or another have heard of the Dead Man’s Tree on the corner of Gardiner St and West St alongside the Post Office. I heard about this tree as a young teenager and recall actually going to see it close up.  And it did have nails sunken into its trunk.  When the tradition was started of nailing Funeral Notices to this tree is unknown to me as also when the practice was ended.  One must remember that originally the West Cemetery was the burial place, then somewhat a bit removed from the town centre.  The funeral parlours were all congregated at the far end of West Street near the railway bridge.  Also for public convenience, the Durban Corporation Transport Dept. provided for a funeral tram which transported the coffin from the residence to the cemetery.   One assumes this was for the central and surrounding suburbs served by the tram network.  Looking at the lady’s dress this looks like an old photo. Adlam, Reid was a well-known funeral parlour. Situated at 589 West St.  They advertise as being Embalmers and Monumental Sculptors.  Their telegraphic address was appropriately “CEMETRY” (sic). 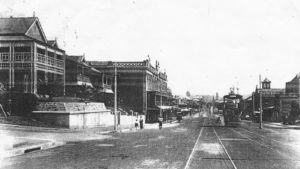 I had to hide a couple of giveaway clues here just to test the waters.  In my picture I post again, the clues can be seen on enlargement. This is the top end of West Street beyond Brickhill and Point Roads. On the right is Baumann’s Bakery (later Bakers) with the small glassed tower.  Next door was the Lowther’s Hotel. This was the forerunner of the Lonsdale Hotel. The tram destination board reads “Beach”.  On the left one can see the name board “Federal” which was the name of the hotel.

The Federal lasted well into the 1970s if I recall much changed though and in the end was a rather tired looking building.  The next two buildings on the left I cannot identify. Someone suggested the Echoes Hotel.  Perhaps, as the Echoes was located in this area. So was the Belmont in later years.  Other buildings which sprung up in this area were Ottawa Court and Olympic Court. Age of the photo is again reckoned. The Post Office is there as well as the tower of the Natal Bank Building on the corner of Gardiner St and West St.  The dome must be the City Hall which dates to 1910.  Electric trams started running in Durban in 1902.