This week something different.  I would suppose that the harbour would have had more interest for boys than girls growing up in Durban. It has though always been an integral part of Durban.  For me it has a personal connection because it was in Durban Harbour that I landed as an immigrant.

Here is a newspaper cutting I was able to retrieve from the Killie Campbell Archives of the ship Toscana on arrival.  My mother and sister indicated by the X.  I am hidden behind the side of the ship. It was quite a trip my Mother used to tell me and some died during the journey and had to be buried at sea.  Coincidentally 73 years today and it was a Friday in 1948 as well !  The ship was quarantined but allowed to dock the next day. 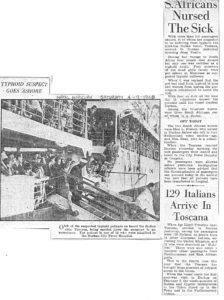 In later years I got to know the harbour sort of well as I would accompany my late uncle in his quest to catch the “big one”.   Very early Saturday mornings we would travel from Greyville all the way to the seine netters’ homes at Fynnlands to buy fresh shrimp bait. Then drive back via Edwin Swales Drive bathed in the eerie orange glow of the sodium lights  it was lined with, all the way to the North Pier, or T Jetty or one of the Shed berths.  During school holidays when you had to keep yourself busy with something to overcome the boredom, I used to walk from the bottom of Moore Road down to the I and J Fisheries Wharf  via Albert Park, across the Esplanade and the railway lines.  I used to take sandwiches and cool drink for lunch and bait was got from I and J being fish scraps or fishing boats unloading.  It passed the day and with other boys there you chatted and made friends.

My late brother in law also caught the fishing bug and went to the extent of buying a small bay boat, the Doric. The three of us, my uncle, brother in law and I, amateur sailors we were, were nervy in the boat, as sudden movement would make the boat rock with all us clinging to the sides.  eventually we got the hang of it.  But another adventure and memory and I can say, I have fished on the Bay.

The other attraction of the harbour was that for many in those years, it was an outing to kill a few hours away from home. You could drive around the harbour at will, stop alongside ships berthed, look at where they were registered indicated on the stern, what was loading / unloading, drive past the dry dock and the floating dock,  go to the yacht club and see what was going on there.  For some a day’s fishing with the whole family in tow, deck chairs, a picnic lunch, bored girls listening to music on the car radio in the back seat.  Simple but pleasurable amusements of the time.

One forgets that the Bay had serious shortcomings before it overcame them and developed in to the largest harbour in Africa.  The most difficult one was the sand bar at the entrance which precluded any heavy ship from entering.  There is a long history of the attempts made to overcome this problem which eventually was solved by dredging and the erection of the two piers.  The Bay, originally the Beach for Durbanites , changed when harbour development started in the 1900s.  The first improvement was Maydon Wharf.  It is interesting to read of the Bay’s history.  So my pictures are not modern times but what was in the past.  I hope you enjoy them. 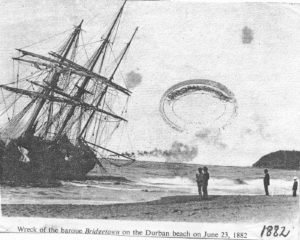 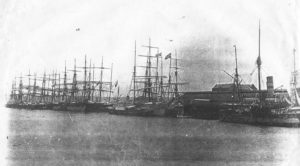 Sailing ships tied up in Durban Harbour circa 1890. 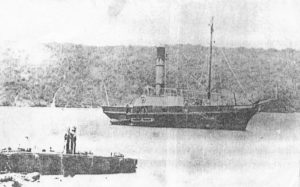 Durban’s first steam tug and first in Africa, the “Pioneer” anchored off the Point. 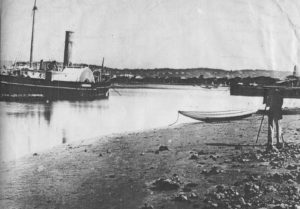 Another early tug, type of paddle steamer, the “Forerunner”.  circa 1890s. 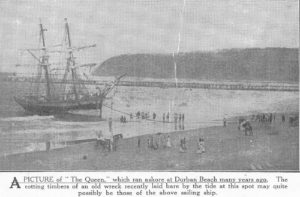 Undated picture of the wreck of “The Queen”. The construction at the back could be the building of the North Pier. 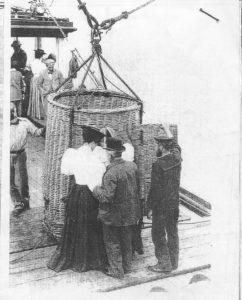 Because heavy ships could not enter the harbour safely, passengers were required to be transferred to smaller boats and these would take you into the harbour.  Picture shows passengers entering the basket prior to transfer.  Must have been traumatic for some. 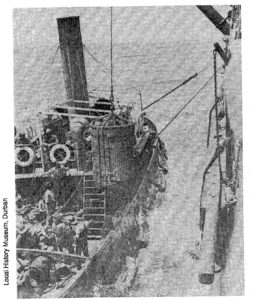 Not too clear but the basket about to be landed on the landing boat. 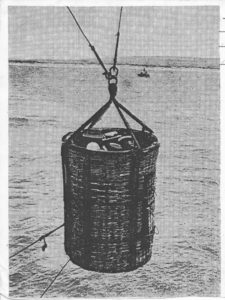 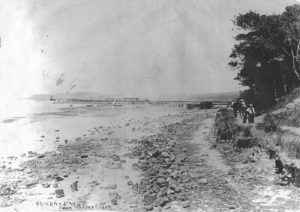 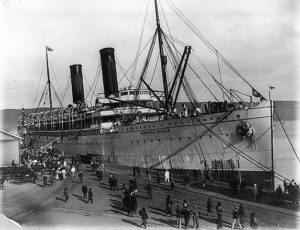 26th June 1904 the Armadale Castle docking in Durban. The first heavy ship to enter the Durban Harbour marking the success of the dredging operations carried out in the harbour mouth.  I recall that in Castle Arcade  (later demolished) in the central passage there was a large detailed model of this ship. After demolition of Castle Arcade, the model was moved to the Durban Museum / Art Gallery and for years stood on the ground floor just right of the staircase going upstairs. The last time I went there, some years ago now , the model was no longer there. 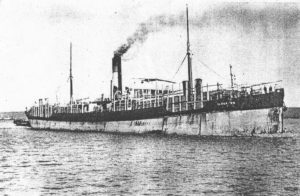 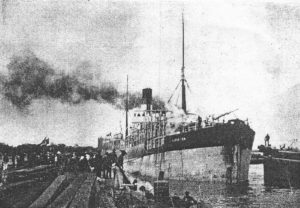 SS Ilderton”   being nudged up against the wharf with the help of a tug. 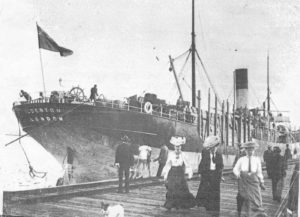 The stern of the Ilderton with sightseers gadding about.  Note the wood cargo on the deck 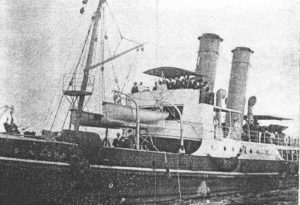 Durban Harbour tug “Sir John” with dignitaries on deck about to disembark having witnessed the docking of the Ilderton. 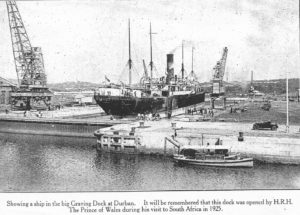 1929 picture of the graving dock in use not long after its opening.. 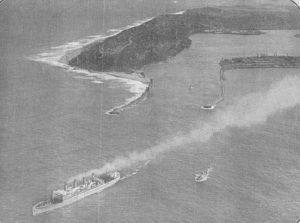 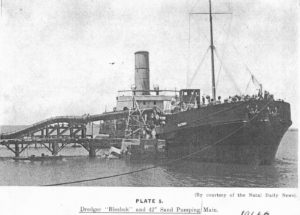 The dredger “Blesbok” circa 1940. Looking relatively new.  Pumping out dredged sand.  The harbour’s dredgers used to lie, tied up in the harbour channel.  There was another older one that was in operation in the mid 50s and I think it was named Cyclops 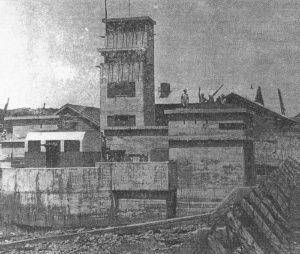 The North Pier Battery during war years.  Before my time but it was still there in the mid 1950s when fishing at the pier. I do not recall the high building part as I remember it being lower, this portion remaining and seemingly abandoned.  Eventually converted into a popular drinking water hole called Thirsty’s and finally demolished  when the realignment and construction of the new North Pier and Harbour Mouth Widening Project was started. 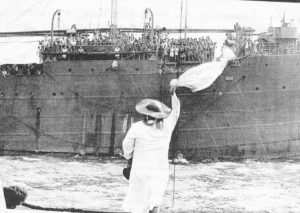 A nostalgic photo of Perla Siedle Gibson waving farewell to soldiers being shipped out of Durban.

A statue commemorating her wartime effort of singing to troops leaving Durban was unveiled by QE 11 on the North Pier.

I hear that it is no longer there. 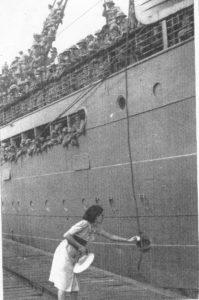 I wonder what the story behind this wartime picture is?  Who is she? What is in the note? Who is the guy who lowered his helmet?   Where was the ship headed? Did he survive the war? A captured moment in time!