I was pleasantly surprised by the great reaction to last week’s Pot Pourri 12 as I thought the pictures were rather meagre but it goes to show as the lyrics go in Chuck Berry’s 1964 rocker  “ C’est la vie … you never can tell”.   I was particularly touched by a comment of a 92 year old grandmother who remarked of the wonderful memories revived in her because I mentioned the Royal and Regent Dairies in Umbilo Road. 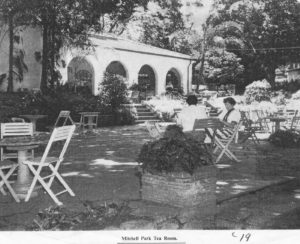 It is years since I was back there but Mitchell Park was a favourite visiting place when my children were toddlers.  The open grassed spaces shaded by the trees, the sand pits, swings and see saws.

Walking around looking at the animals there. The tortoises were a clear favourite.  The rather sedate tea room serving tea and fresh cream scones.  I think this picture captures the essence of the Mitchell Park I remember. 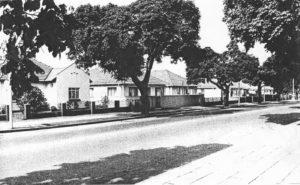 Cowey Road was a lovely road to traverse. It had a certain order and rightness about it.  Never pompous but looked like a lovely neighbourhood to live in. Unfortunately there are no street numbers to this picture to identify the houses.  My memory of it was a school friend who lived in Cowey Road. The family were Italians and the father was a stone mason and marble sculptor. Sadly the far end of Cowey Rd has deteriorated badly with homes being abandoned and left to rot.  There was a lovely home with a tennis court that was derelict. 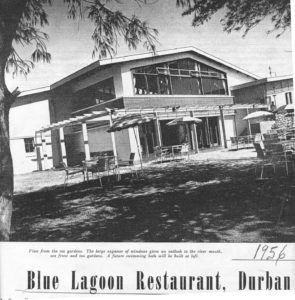 In my time I did visit the Blue Lagoon but I cannot recall this building at all. I seem to recall a tea room at the Blue Lagoon which was situated below the Ellis Brown Viaduct.  Anyone have memories of this? 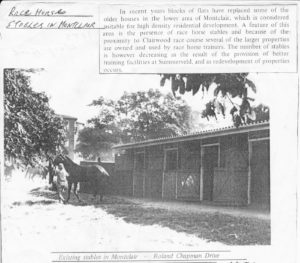 The horse stables in Roland Chapman Drive, Montclair.  My memory of this is as you drove past Montclair on the South Coast Road heading south, looking right in the distance was an open paddock edged by stables you could see in Roland Chapman Drive. Occasionally the horses were out grazing or being ridden around the paddock. No doubt these stables were associated with racing,   the Clairwood Race track being relatively close to this area.  The area has now been developed with blocks of flats being built and with the closure of Clairwood another memory fades except  for those who remember the stables . 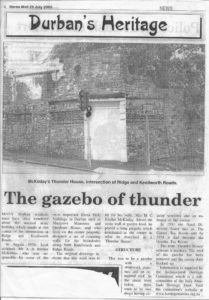 The Gazebo of Thunder

I know where this is located in Ridge Road but did not know the story. The late Allan Jackson did some investigation into this strange building and I have an idea the notes in this article are his. This is the corner of Ridge and Kenilworth Roads on the Berea. . Allan Jackson the instigator of the website Facts about Durban (www.fad.co.za ) died in Brisbane Australia of pancreatic cancer earlier this year. 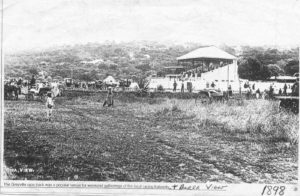 A very interesting photo of the Greyville Racecourse in 1898. From what I have read the Greyville Flats were rather waterlogged as they were the catchment area for the Berea shown in the background.  The Greyville Flats were eventually drained and I suppose was the ideal pace to locate the race course.  Initially the course was a continuous oval flat course but much later with the growth of the Berea an additional road was necessary to be cut through it to provide more access to the Berea.  A road was constructed through the racecourse, Epsom Road/ Marriott Road and to keep the course level, two subways were built.  The central portion became the Royal Durban Golf Course.

The picture looks like a gathering of people with horse drawn carriages perhaps getting together after a day’s drive around Durban and its environs.

Talking of the subway on the Epsom Road side, I remember when a Durban Corporation double decker motor bus was taken on a test drive. The driver got onto Epsom Road, put foot and approached the subway at speed forgetting there was limited clearance.  He succeeded to some  extent in converting the double decker into a single decker!   The newspapers made hay of the incident. 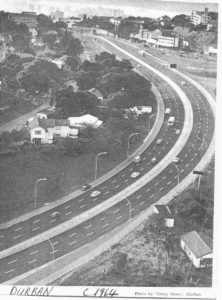 An interesting photo made identifiable by the old Toll Gate Bridge in the background.   Amongst the buildings on the right is a block of flats I remember with the name Lirenja.  You probably wondering how I remember that!  Well years ago I was secretary of the Marist Old Boys Association and they hired a PO BOX from the Mayville Post Office which was situated there. Next door was this block of flats with a strange name that stuck.  The road was actually the start of the new Jan Smuts Highway. The road behind is the one off South Ridge Road, one turns right at after the Toll Gate Bridge to get to Mayville and the tennis courts. The building with the many windows on the left if I recall correctly  is the block of flats called Rohallion. 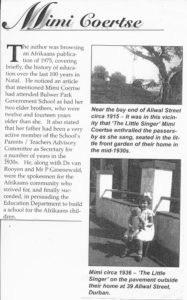 Now this I did not know that Mimi Coertse spent part of her formative years here in Durban. This article must be out of a book concerning a school.   I also was unaware that there were houses in the lower part of Aliwal Street. My 1938 Dbn Directory confirmed that and No 39 was occupied by W.B. Cree.  To refresh your memory places which you may remember being in lower Aliwal Street in later years were the Piccadilly Cinema, Donnellan Rich (Ford Cars Agents), the Napoleon Restaurant,  Saxony Flats (art deco), King and Sons Dunn and Co. (Travel Agents and Shipping Reps.), Merchant Navy Officers Club, the Congregational Church (now a Mosque) and the Embassy Parking Garage. 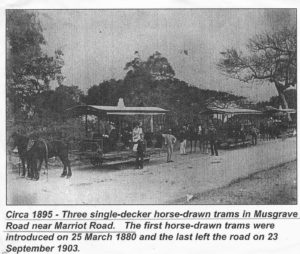 This interesting picture in a way gives an idea of what life was like in Durban 125 years ago. Things were done prim and proper looking at the dress.

Thanks to Frank Beeton I have these notes below concerning horse drawn transport at that time. 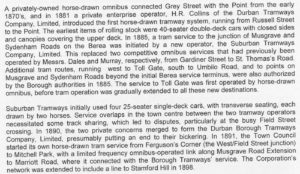