A walk down a Memory Lane. 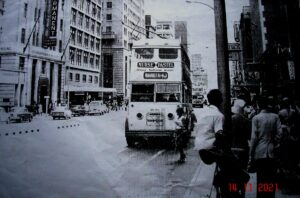 Amongst the many newspaper cuttings I was given, this one I came across took me back to different times, different chapters.The picture evoked memories for me and perhaps it does for the reader as well. For those who cannot place it, the location is Smith Street, just near the intersection with Field Street.  To date the picture there are two pointers. First, the trolley buses are still running and they came to a halt in 1968. Second the construction of Eagle Building on the right hand side is underway.  The Eagle Building was completed by 1968 so I would put this picture at roundabout 1965.

Looking on the right hand side is an obscure view of Salisbury House with Salisbury Arcade running through it. Salisbury Arcade, probably one of the most used arcades in Durban and there were quite a few arcades.   The arcade at the Smith Street end was open to the sky whereas the West Street end was built over.  At the Smith Street end, looking a bit like an open courtyard, there were stairs leading upstairs to the shops on the upper level.  Remember on the second landing was a bridal shop and the ever popular Track and Trestle hobby shop run by the late Carl Pieters.  Saturday mornings the model train men used to congregate there.  I used to join them from time to time.  From memory in the arcade was Jerome’s (men’s outfitters), a jewellery shop, Elna Sewing Machines (where Mr Backus sold my wife her Elna Supermatic),a tobacconist, Burlington Art Gallery, a Heel Bar, Florette and Goodyear (florists) , Dragon Tea and Coffee (with the shop window painted with a dragon),  there was an umbrella shop and the Moore Shoe Company, as I remember it an elite shoe shop.   At the end of the arcade Smith St side was Burmeister’s Camera Shop.  In later years Keogh Coins took over the Burmeister shop and a bistro called the Press Club opened on the opposite side.

Not in the picture but adjoining Salisbury House was the Prudential Building which recalls another memory. On the fourth floor was a manufacturing jeweller by the name of Ray Dyer.  He traded in diamonds and it was he who sold to my fiancé and I, the diamond and made our engagement ring.  Looking in the distance one can just make out the Field Street intersection. The parapet with the pillars is Yorkshire House standing on the corner of Smith and Field Streets. Yorkshire House was later demolished to make way for the glass exterior General Accident Insurance Building.  Yorkshire House adjoined the OK Bazaars and that shop must bring back memories for many.   From the Smith Street side you entered the OK via steps (was there an escalator going up as well?).  As you entered, overhead was a mezzanine level which housed the OK‘s milk bar / restaurant which overlooked the shop interior.  One could get a decent cheap meal there before heading to the movies on a Saturday afternoon. As you entered the OK shop itself from Smith St. on the left was the Hardware Dept. I cannot remember too many shops in town proper that had a Hardware Counter as well stocked as the OK. Roughly half in on the right were the lifts and also quite a grand staircase going up to the Toys and Gardening Depts.  Close to the lifts was a Music Bar and a work friend of mine, then much younger, Spider Kelly did Saturday stints at the music counter. On the West St end I still recall that as you entered you were confronted with a counter placed across the entrance.  This forced you to go left or right into the shop. Behind this counter was the sweets bar. Remember Pick and Mix?  Getting away from the picture but a memory on the West St. side.  On Saturday mornings an old gent would sit on a stool and play a saw fiddle outside the OK.  A saw fiddle was an ordinary carpenter’s saw which the player putting the handle under his chin, bending the saw and using a bow managed to get sweet tunes out of it. Anyone remember this?

Back to the picture. Roughly opposite the OK was Parry Road with a Central News Agency shop on this corner.  Also opposite was Realty House the HQ of J Isaacs, Geshen and Co. The top of this building is just visible jutting above the trolley bus.  The big building on the corner of Field and Smith Sts is the Barclay’s Bank (don’t forget the D.C.O) Building and this occupied the whole block between Parry Road and Field Street.

Across Field St on the left is the Union Club Building.  At street level were the French Bottle Store and the Standard Pharmacy.  Round the corner in Field Street I seem to recollect The Clock Shop was located there as well as the Husqvarna Sewing Machine outlet. We looked at a Husqvarna before deciding on the Elna.  Then the Permanent Building Society building. A rather sombre building with a grey black exterior cladding.  Memories of my wife and I entering that building with a bit of trepidation one Saturday morning in 1971 to apply for a loan to buy a property.  We had to be interviewed prior to the loan being approved.  We did get a loan and I was indebted to the Perm for the next 22 years!

Look at the Perm front entrance and you will see a road sign.  On it the sign reads “Bay Passage”. Take my word for it. I know that narrow road well as my father lived for a short while in St Andrew’s building which stood at the end of it.   Bay Passage was a dead end.  It ran all the way down to the Esplanade but at its exit it was blocked off with bollards.  In Durban’s early days, it was a very narrow thoroughfare which ran down and gave access to the Bay. Years later the old St Andrew’s Building was built on the site but access to the Victoria Embankment as the Esplanade was then called, was retained by the St Andrew’s building straddling Bay Passage with an archway. St Andrew’s Building was demolished many years later.  Today the end of Bay Passage is a parking area for Quadrant House tenants.  Quadrant House is that lovely iconic building corner Field and the Esplanade.

The building hardly visible across Bay Passage is Poynton Chambers.   At street level were two well-known estate agents’ offices, Aubrey Lurie and L.A. Fletcher.  However the second floor was the home of the Berea Rovers Club.  Berea Rovers were a well-known sports club mainly rugby and cricket but they also fielded hockey sides.  I was a member of the Gongs Hockey Club then and recall Gongs attending social events at the club. Luckily these rather noisy (it was the 60s) events were after business hours and weekends as I am sure the down stairs tenants would have complained.

Then the trolley bus. I recall when we first arrived as immigrants in Durban in 1948 one of the first things my sister and I did with my father was go for a bus ride.  Rushing upstairs to get to the front seat and standing holding the bar that ran across the window.  The trolley buses were like quiet reliable friends.  With no car in the family we depended on the buses totally.  I have this memory of the two seats at the very back upstairs. These were reserved for Black Passengers and if not occupied were strictly reserved. This bus is coming in from one of the outer suburbs and heading for its terminus.  Possibly Marriott Road Route 43 is its next journey.  It was a fact of life that many living in and around Durban did not need a car for transport.  As long as you were relatively close to a bus route you could depend on the buses.  In my own case, for years we lived on the Moore Road side of Berea Road and later on the Botanic Gardens Road side and we were never stuck for transport.  It was no wonder that on Saturday’s town would fill with people as there was ample transport in and out. Teenage children could quite easily meet in town and move on to the movie houses which again were ideally closely situated within walking distance.   I would say the whole of Durban were taken aback when the news broke out that the trolley buses were to be withdrawn in 1968.

A sad note to end on as the final days of the trolley buses I think also heralded the start of the end of Durban that I grew up in.