A nostalgic look back at Durban’s buses.

When I arrived in Durban in 1948, the trams had been taken off but the trolley buses were still going.  I have this vague recollection of my father taking my sister and I for a bus ride soon after arriving in Durban down along Marine Parade.  Part of the memory was the three of us went upstairs and sat on the very front seat where I was able to stand and look out the front window.  Thereafter I grew up with the trolley buses.  My parents never had a motor car so we relied heavily on Durban Corporation bus service.  It actually was so good that my sister never managed to learn how to drive a car yet she managed to raise her family using the bus service when she needed transport.  Luckily for her she had a bus stop virtually outside her home.

Looking back it was an excellent bus service.  Even for the far flung suburbs.  On a personal note I used one very day getting to school and back, Saturdays the inevitable trip to town to join my friends there, going to the movies with a date before I was eligible to drive.   And they even laid on a late night Saturday service to get movie goers home.  Unfortunately if you accompanied your date home after Saturday night movies, your return trip was more likely on shank’s pony or thumbing a lift.  It really made life enjoyable because you could get out and about and families without transport could still visit family who lived in distant suburbs.   It really was a sad day when they pulled the trolley bus service followed eventually by the motor buses.  Today the bus service of what it used to be is only a vague memory.

Today’s pictures are a glimpse back in time.  Those who rode the buses will probably be able to picture where they are in some of the pictures. 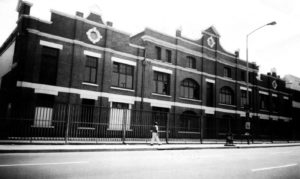 The Bus Admin Building and Sheds  in Alice Street.  This is where the buses used to go when on its last trip of the day, the destination indicator up front would read DEPOT. 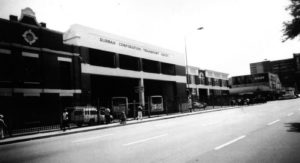 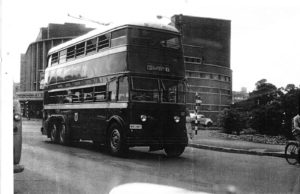 A trolley bus in the dull red and cream colour scheme circa 1956. In the background the Alhambra Cinema and Warwick Avenue.

I was trying to remember where the bus now in West Street would get into Smith Street as the destination indicator states “via Smith Street”. 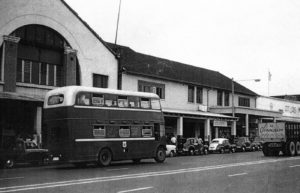 A motor bus in Alice Street beyond the bus sheds heading to town.  I cannot recall the gabled building but next to it was Atlas Garage.  This was one of those well known garages in and around Durban.  If you drove a skedonk that was liable to break down at any time especially after hours you had to know two garages, Atlas Motors and Epsom Motors.  They sold spares 24/7.  I still remember going to Atlas Motors to buy spark plugs that fired in oil. If your piston rings were leaking oil, these plugs would fire in the petrol/oil mix in the cylinder. After hours they did a busy trade and Atlas was also a petrol station. 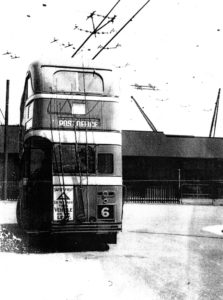 The only trolley bus service in the world that catered for fishing rods. 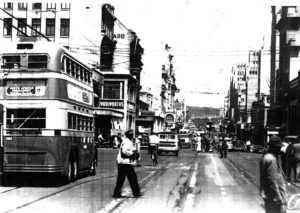 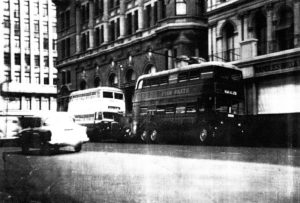 Gardiner Street outside the Natal Bank Building.  Unusual for a motor bus to be there. 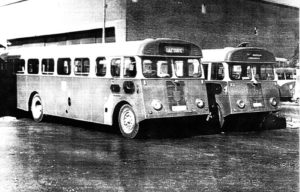 I was trying to remember when these peculiar looking buses were introduced. This would be around the time the double decker motor buses were being phased out.  Must have been in the mid 50s and I recall there were red ones for Europeans and green for Africans known as Green Mambas.   I think they preceded the longer red and green motor buses. 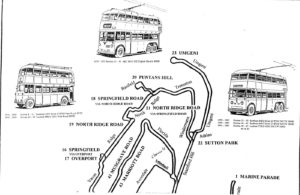 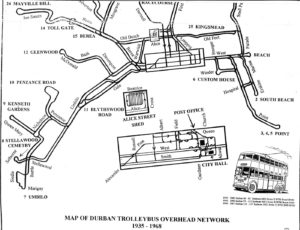 These pictures are the Durban Trolley Bus routes circa 1935 to 1968. The map is too big to show at once so if you print the two you can stick them together to get the whole map.  I have an idea the map is the work of Kevan Mardon and his associates who had an intense interest in the Durban Corporation transport service. Later found that the maps were drawn by David Jones. 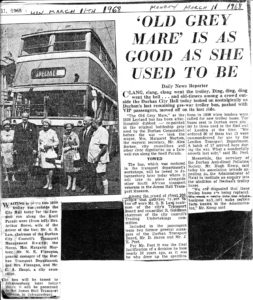 Newspaper cutting marking the demise of the Durban Trolley bus service 11th March 1968. Probably someone high up in the transport section had a sense of the occasion ….beware the Ides of March. 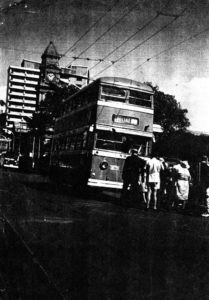 The last trolley bus to operate in Durban was an original 1938 model.  It ran as a SPECIAL on the day the trolley bus service was ended.  It was then towed to Johannesburg where it was housed in their Transport Museum. As far as I know not a single trolley bus remained intact in Durban for the record. 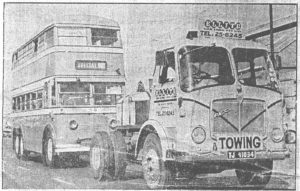 1902 Durban Corporation introduces electric tram route, the first being from city centre to the Point.

Above information courtesy of Frank Beeton.