The alert that Christmas was coming was the early arrival of overseas letters. Letters as opposed to the usual aerogrammes. Christmas letters usually included a card and photos which you could not include in an aerogramme. 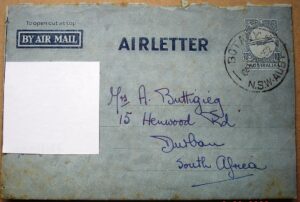 An early 1950s Australian airletter also known as an aerogramme.

My family had links to family in Australia and my Mother eagerly awaited the mail from down under.  In those days overseas airmail was not as direct as it is/was today so it had to be posted on time. I still recall the Post Office putting out notices in the newspapers as to when the closing dates were for mail to get to the UK, Europe, the USA , Australia/NZ in time before Christmas.  Being a junior stamp collector I looked forward to the stamps that were affixed.  I remember these letters were touching moments for my Mother looking at the photos enclosed.  My Mother used to reciprocate by sending photos in return. Having no camera, my Mother resorted to photo studios. Her go to studio was Stella Nova in Gardiner St opposite the Cenotaph. Stella Nova offered 12 square size black and white prints at a reasonable price. So an appointment was made. My Mother cut up the photos,  inscribed on the back and sent to the family along with her Christmas cards. 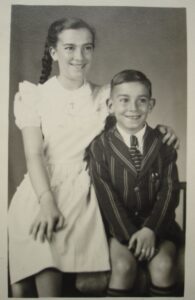 A typical photo studio photograph. My late sister and I 1951. 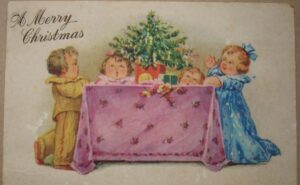 The Christmas cards that started arriving became part of our Christmas decorations.  My mother allowed my sister and I to decorate our lounge.  A box with the packed away Christmas decorations was brought out and we had fun putting them up.  They were the same as last year’s but they had to do.  The paper decorations, to describe them were “expanding concertina cut outs”. They could reach from one corner to the central light fitting.  These were strung from all four corners.   Some years we actually made up new decorations using coloured crinkle paper which was cut into wide strips and plaited by folding one way and then the other way.  Cannot remember the last time I saw Crinkle Paper!  It was available in a host of colours. Then there were the “twirlers”, shiny metal foil circles that extended when pulled out and when hung rotated in the breeze.  We also had a Christmas tree (an imitation one) whose branches you straightened out. On the beach front the Rotary Organisation had a place where real pine trees were sold for charity. We had some bought tree decorations but we added to them by making our own using scrap cardboard and coloured glitter. We also covered matchboxes with crinkle paper or old silver paper, sourced from eaten chocolate slabs and cigarette boxes, and tied thin ribbon around them as decoration.  Tinsel was strung copiously on the tree and a big star placed on top. We had a string of lights as well, the globes having filaments and it was my job to see why they did not work before putting up.  Normally a dud globe or the wiring coming loose. No flashing LEDs in those days, you had only two options ON or OFF!    Christmas cards were strung against a wall and if too many a second string was put up.  I always wanted a Christmas nativity set but that had to wait till I had my own home.

There were other aspects to Christmas. Going to Midnight Mass at the Cathedral. We only tried it once as we got to the Cathedral by trolley bus on time having to be there early to get a seat. There were not that many Catholic churches in the suburbs at the time so the Cathedral drew large crowds for that one Mass. Getting home was by taxi which my Mother pre-arranged! We normally went to the 7 am Mass which enabled us to have a full day thereafter.  Another was Christmas Trees for the children. That is the name I learnt how to call them. They were parties for the children/ grandchildren of members of the organisations arranging them or even work related.  I never attended these as a child but my children did and they really did enjoy them.   The other Christmassy thing I remember was the sale of Christmas stamps in aid of TB.  I seem to remember it was the only organisation allowed to set up a sales table inside a Post Office.  I won’t go into Christmas Stamps but you can read about the organisation in the pictures and notes I have posted. 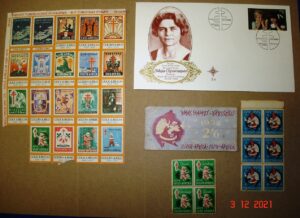 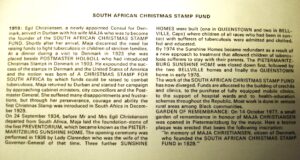 The tempo of Christmas shopping ramped up as the days to Christmas got fewer. Schools broke up circa mid December when the real invasion of town took place.  Mothers with children in tow now took over.  An incentive for the children was the purchase of a Lucky Dip. 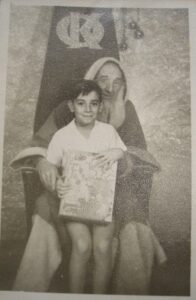 This was a mystery box with unknown cheap items inside. There were Girls and Boys boxes and if I remember cost about half a crown (25 cents) each.  I was trying to remember the contents. Usually every Lucky Dip had a cardboard board which was colour printed on one side with Snakes and Ladders and on the other side Ludo. The dice and discs were in a plastic bag. For boys, a water pistol, small compass, metal puzzles you had to untangle, a small cap gun and caps and a three piece balsa wood glider you had to assemble were items I recall.  Along with the Lucky Dip in some shops there was a switch back ride, The Hub had one. This was a ride in a box with wheels which started on a slope and then free wheeled over bumps to the other end.   For the really small ones the promise of seeing Father Christmas and a photograph with him was exciting. Most shops had a Father Christmas you could be photographed with on purchasing a Lucky Dip, normally a retired man and ideally a plump jolly man. However looking back I can now understand why there was so much trauma with really small children around the Father Christmases.  See my pic!  That ain’t the Father Christmas Coca Cola showed in their ads.

For us, Christmas presents were mainly in the line of clothing or necessary items. My wish for an electric model train never materialised but I did find a bit of solace in that every year I went to a shop at the Russell St end of West Street called Shimwell’s.  They were the agents for Tri-ang Electric trains and they gave out free train catalogues at this time of the year. These kept the dream alive. They were also agents for Meccano another popular Christmas gift for boys. Imported from England the larger sizes were quite expensive. I remember the aura about the ultimate; a Meccano Size 10 set that could build the large travelling crane pictured on the Meccano instruction book. In later years I eventually saw what a Size 10 was at a Meccano collector’s house. It actually came in a custom made wooden trunk with a lid and drawers.    Another toy that was popular was probably a forerunner of Lego. I think it was called Bayko and consisted of a flat plastic base with minute holes drilled all over it. Thin steel rods were put into the holes and the “bricks” which had two holes drilled through them were threaded on the upright rods. Much smaller than Lego it took a lot of these bricks to build a model house. I never had a set.  The one Christmas I do remember was when the Hula Hoop craze hit South Africa. I think every kid in Durban got one for Christmas!  I can still recall the best way to carry a hula hoop in the Christmas rush was to “wear” it like a sash.  It wasn’t very elegant for mothers with multiple hoops but it did free the hands!   Very popular as well were Dinky Toys which were rugged and not ultra-expensive. New models were added every year and today some models are worth quite a bit. I personally liked the Dinky racing cars and had some of them.  Had as they were handed down to my young nephews.

As I recall it, Christmases in my younger years were very much family centred.  My sister and I took time to make Christmas cards for my mother and we each bought her and each other small gifts. As a combined gift we bought my Mother her annual supply of 4711 Eau de Cologne. Brings back memories of when she opened her handbag, the smell of the scent wafted out.

As children, Christmas Day was spent with my Uncle and Aunt and her family at their home.  They were the only relations we had. I think this was normal practice with many families spending the day with family and if it was not the whole day, close families would all get together to at least have morning tea together at one of their homes on Christmas Day.  I still recall that on Christmas Day, the milk bottles delivered had special Christmas foil tops printed with holly and berries.  The delivery man was given a cash gift from the flat’s tenants collected by the building supervisor.   The same was done for the cleaning staff employed.   Christmas days were more “at home” days with Boxing Day being the day for going out for a day at the Beach or a picnic down the coast.  Meals were always Christmas Day leftovers.   The influx of the Transvalers meant they virtually took over the beachfront so we used to go down the coast to other beaches such as Umgababa, Umkomaas and Scottburgh.

In later years, with my own family we continued the tradition of Christmas being a family get together and Boxing Day being a get together with friends alternating from one home to the other. 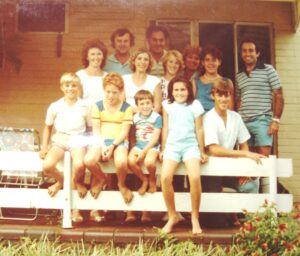 Myself with two school friends and their families who kept the Boxing Day Tradition for close on 50 years.

These Boxing Day events continued for many years with my small group of school friends who kept up the ritual. The trend somewhat remains today but with many families broken up with children emigrating, new norms introduced, older family and friends getting fewer, past Christmases and all that went with them are becoming but memories.