The subject of the vessel Aimee Lykes came up in the previous post and my informant Graham Read sent in a picture he took while the vessel was in dry dock in Durban. 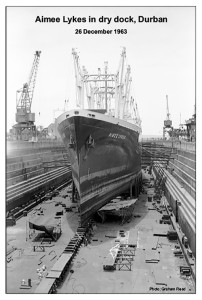 She nearly sank after running into the Aliwal Shoal at speed in October 1963 and spent six months being repaired in Durban. There is quite a lot of info about Aimee Lykes on this page.

Graham’s picture sparked quite a few memories for me and I believe it is quite likely that I also viewed the vessel while she was in dry dock. Visits to the harbour and dry dock were staples of the Sunday drives I took with my dad when I was very young and I think it quite likely that we would have gone down to see the vessel after all the publicity she received. In those days, one could walk right up to the edge of the dock and peer down into it. It seemed unimaginably deep and the memory can still give me a cold shiver.

Other popular Sunday drive destinations I remember were Albert Park to play on the swings and the viewing deck at Louis Botha Airport.