In a number of places in this site a tragic aircrash on Stamford Hill Airfield during WWII is mentioned. There is an eyewitness account, a few more details and, now, a picture of the pilot sent in by his nephew John Blake. 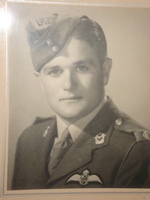 On another more cheerful subject, Dave Tilley wrote in with the following about the Mermaid Lido:

Allan
This was built in the early fifties by JG and Ron Tilley (grandfather and father respectively), who were also builders in the Durban area between 1947 and 1954.
The top floor of the mermaid was a restaurant  with a dance floor below and the shops as described. The yearly lifesaving competitions also used to be held from this location with at least 12 teams taking part. This used to be quite scary as those being ‘saved’ used to swim out to the nets and at times sharks could be seen on the other side.
Regards
David Tilley (UK)