More from my late father’s scrapbook. He not only took pictures but luckily took the time to date them as well. This picture of my sister and I standing in front of the Durban Cenotaph in January 1949 raises some questions.

My sister and I had arrived in Durban in September 1948, so we had been in South Africa a mere 4 months. What has always intrigued me is that many years later I was led to believe that when King George VI and Queen Elizabeth and the two Princesses visited Durban in 1947, they officially opened the Memorial Gates that now surround the Cenotaph.

The Cenotaph dates back to the 1920s and is a war memorial ostensibly to the War Dead of World War One. This photo shows that there were no walls erected yet around the Cenotaph and the gates directly in front of the Cenotaph are non existent, roughly 2 years after the Royal Tour. Can anyone throw any light on when the actual walling and the erection of the gates with the the two lions on either corner, were actually completed and opened? 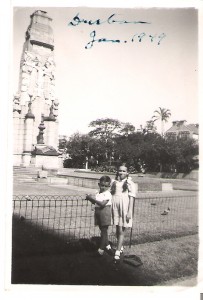 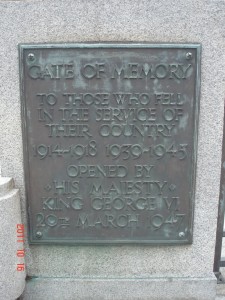 There are two plaques either side of the memorial gates directly in front of the Cenotaph. This is the left hand side one commemorating the opening of the gates in 1947. However from the picture above you can see that in 1949 nothing had been erected yet, hence my query.

The Gates of Memory at the Durban Cenotaph were opened on 20 March, 1947, by King George VI, during the Royal Tour of South Africa of that year. The photograph is from a souvenir booklet of the tour.

The gates are on the axis of the Cenotaph. Gerald’s photograph, above, is taken well to the left of this axis and gates. The balance of the masonry work was completed later.