Sheldene Crawford, whom I acknowledge here, forwarded me extracts from a book she has concerning some of Durban’s better hotels at the time. The book dates to 1958 and was published by Victor de la Hurst. Sadly some of the hotels do not exist today and have passed into history. I have added my own comments below the pictures. where applicable.  Click on Pictures  to Enlarge. 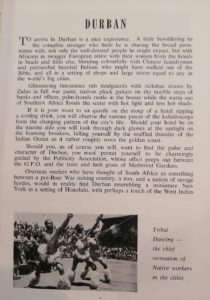 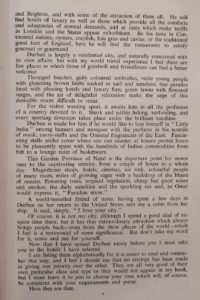 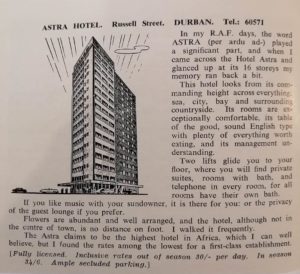 The Astra was one of the late Sol Kerzner’s first forays into hotel ownership. If I remember correctly from the Astra he moved to Umhlanga Rocks and built the Beverly Hills Hotel.  It was a popular hotel and had a well attended night spot.  In later years the hotel was sold and turned into an old age home.Unfortunately the demographics of the area  changed drastically  and the whole area went down.  The old age home was more or less forced to close down and the property again put up for sale. It was purchased and turned into student accommodation. 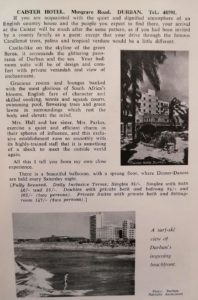 Caister House was originally the home of B W Greenacre of the department store fame. The home eventually was transformed into the Caister Hotel, very upmarket hotel. In 1986 the future of the Caister Hotel was uncertain and there was threat that it would be demolished and replaced by a high rise building. Fortunately the building was saved from being demolished and turned into an exclusive old age home. 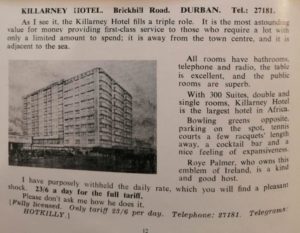 The Killarney Hotel in Brickhill Road was a favourite with the Tranvalers that descended on Durban during the holiday seasons. It really was a family hotel and though not at all elegant it provided comfortable and affordable accommodation. It still serves as a hotel as far as is known but in the present situation its fate hangs in the balance. 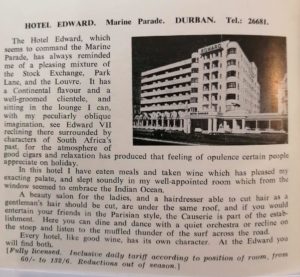 The Edward Hotel was always regarded as Durban’s premiere hotel until the 1980’s when the multi storey glitzy hotels started to be erected along the Marine Parade. Sadly in 2020 the hotel was forced to close down as it was regarded unviable to carry on trading. At the time of writing it has been closed down. 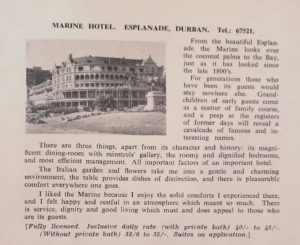 One of Durban’s finest hotels which unfortunately did not survive the demolisher’s hammer. It was pulled down and replaced by an office block. 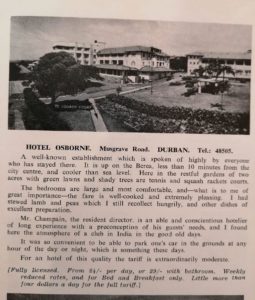 The Osborne Hotel on the corner of Musgrave and Berea Road suffered to an extent when the traffic noise of the Kinmont Canyon which replaced Berea Road became untenable. It was demolished and replaced by an office block and partly medical centre. 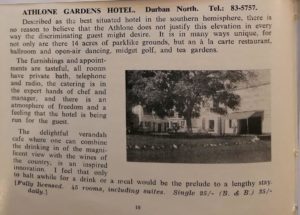 The Athlone Gardens Hotel overlooking the Umgeni River was a very popular hotel at one time in that it had an open air beer garden which was well frequented by Durban folk. One of the attractions were the vervet monkeys which roamed around the area. In later years the hotel facade was much changed and after changing hands was renamed the Riverside Hotel. It was well known for its Barnyard Theatre.  The hotel continues to trade.