Sometime ago I was asked to comment in an email on a subject relating to early Durban. I responded and thereafter was included in a list of several people who are very connected with the study and research of early Durban. A recent email sent to me concerned a certain brick which had particular markings. This subject reminded me of a brick I found here on my plot in the Byrne Valley some years ago. I kept the brick as a memento. The markings indicated Terra Cotta Brickworks of which I had no knowledge so I took the opportunity to post a picture of my brick asking if anyone had any information as to its origins. As far as I knew there were no brickworks in the Byrne Valley nor in Richmond KZN and the only early brickworks I had heard of were based in Durban.

I subsequently did get a reply to my query from Arthur Gammage which I post below. I always find it fascinating that such a mundane item as a brick can lead to an interesting background story. Here is the story.

“According to Hazel England, retired Pinetown Museum Curator, the Terra Cotta bricks were those made by Frank Stevens at Pinetown. The following from Frank Stevens Papers, on the Campbell Collections websitecampbell.ukzn.ac.za.

I have several old bricks – Pyramid were made at Rossburgh, R Till & Sons, Mayville at Brickfield (Joseph Cato’s farm).

There was also an early version of Coronation bricks with the name all in block capitals rather than script. Coronation absorbed all or most of their competitors.

Frank Stevens was born at Kea, near Truro, Cornwall, England, on 25 March 1850. After working in Australia, he arrived in Natal in 1880 or 1881 and started a boot and shoe business in Pietermaritzburg. The business flourished and other branches were opened throughout the country. Stevens purchased the farm ‘Sarnia’, near Pinetown, from the original owner, a Captain Drake, who named the farm ‘Sarnia’ after his birthplace in England. Stevens did some prospecting for gold on this farm. There were good clay deposits and he opened up a brickmaking business which he closed down at the start of the South African War in 1899. (This business was subsequently purchased by the Storm family which later started the Coronation Brick and Tile Co.) Having a large stockpile of bricks Stevens planned the erection of a hotel on the property but before it was completed, the British Government approached Stevens and he permitted them to take over the new building for use as a much-needed hospital. It was named the Princess Christian Hospital and was run as such for the duration of the War. The building was ‘returned’ to Stevens after the war and later became well-known as the Fairydene Hotel, at Sarnia. Stevens built a home in Ridge Road, Durban, and named it ‘Intabene’ (Entabeni meaning the place on the hill). This home was sold in 1929 to a consortium of doctors and in 1930 opened as Entabeni Hospital.”

There is some information on Coronation Brickworks on this site.

Rear of the brick showing no frog was pressed into the clay. 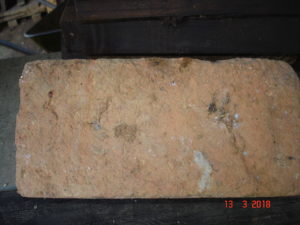 Front of the brick. Note two impressions of screw heads. 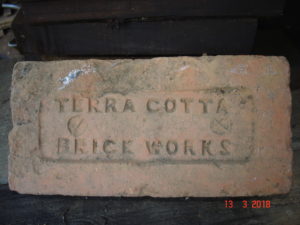 There is only one “old” brick building in Byrne Village that still exists and that is the Etterby farmhouse built in 1928. Whether the Terra Cotta Brickworks supplied the bricks is unknown which leaves the question of how this brick came to Byrne.

Further examples of old bricks made in Durban. Photo courtesy of Hazel England. 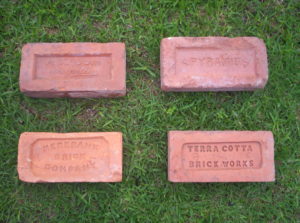