Arthur Gammage has sent me some Durban pictures which are interesting and add to the collection. I have added to Arthur’s notes. The pictures are from a book celebrating Durban’s Silver Jubilee in 1960 marking 25 years of City Status. 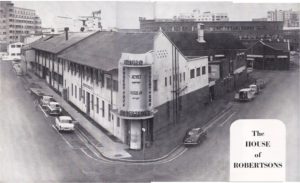 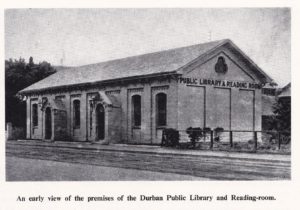 A very old Durban building which dates back to 1879. It was on the corner of West and Church Street. In more modern times the building was altered to house offices for the Durban Corporation Transport Dept. as well as the Durban Publicity Association. Behind it was built the Town Baths. Its frontage in Church Street if I remember correctly was the terminus for the Fynnlands and Bluff buses. This section of Church Street is now a pedestrian section and closed off to traffic. 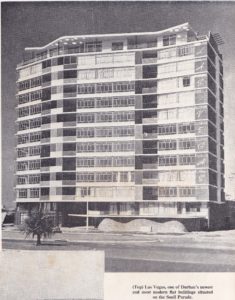 Las Vegas flats on the Marine Parade, designed by Crofton & Benjamin after they had set up office in Durban. Shown here just after completion. 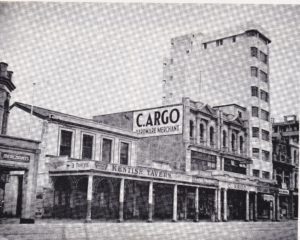 The Kentish Tavern, which is shown on the 1892 Durban Map. The high rise just past C Argo’s (the building is still there) is Bales Building.
The Kentish Tavern was situated at 446 West Street. C. Argo’s was a supplier of bathroom fittings, baths, toilets, porcelain ware etc. This location is 440 West Street. They also had a large warehouse at 562/570 Smith Street and later built a modern office and sales centre there circa early 1950s. The little lane on the left is Foundry Lane and if one recalls was where PW Story, Artists and Special Papers, Display Material etc had their shop. Their premises in earlier times was a billiard saloon and this is indicated in the picture by the “hand three tables” pointing doewn the lane. The Kentish Billiard Saloon was run by H. Levy. To get the perspective of where this is in West Street, in the 1950s/60s Ackermans Clothing Store were on this site with the Roxy Cafe Bioscope lower down. 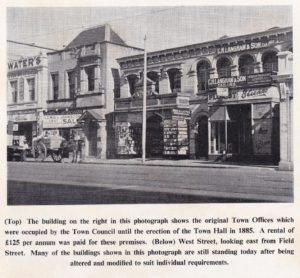 First Town Office (now Chester House, 388 West Street). The column at the right edge is of Anstey’s street Verandah. Again from memory there is a plaque erected at this spot to recall that this is where Durban’s first civic offices were situated. It was mounted on the wall but few actually paid attention to it or even noticed it. 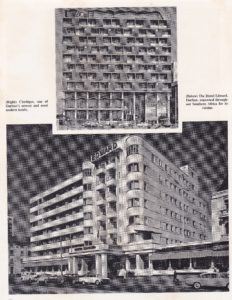 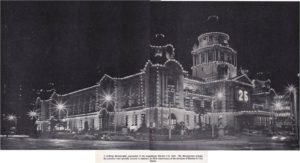 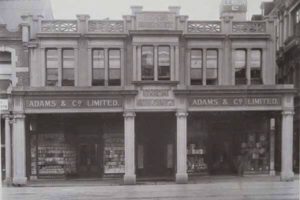 This is a picture I found and a bit uncertain as to whether the Adams and Co refers to Adams Bookshop of West Street. The name of the building appears to be Union Buildings which is listed in the 1938 Durban Directory as 215 Pine Street. However Adams and Co are not listed as tenants. In modern times (1965) the building was still there and the tenants were Telford Shoe Store and Bell Fruiterers. Union Buildings were adjacent to Mark Lane. The high rise building in the background shows LENNON which was a wholesale chemist and pharmacy business. They also supplied photographic chemicals. Their main office was in Aliwal Street but also had offices at 320 West Street. 320 West Street is listed as Lennons Chambers. It probably was demolished along with Castle Arcade when the present 320 West Street building was erected.

Arthur Gammage has again sent me some delightful old photos this time regarding the Vasco Da Gama clock which was inaugurated in 1897 to mark 400 years that Vasco da Gama passed the Natal coast and named it such. The first picture shows the unveiling of the clock in Point Road. In early times Point Road was called Scott Street but this fell away and Point Road it was. 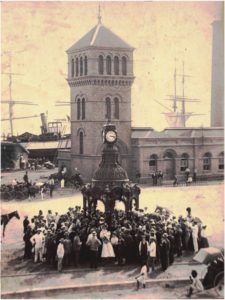 A very interesting photo showing Point Road with the Da Gama clock installed. Note the rickshaws waiting for business. More interesting are the sand dunes behind the buildings. They are higher than the buildings and probably the reason why the today’s North and South Beaches were called then the Back Beach. The beach in those days was the Bay beaches not the beaches we use today. Photo circa 1905. 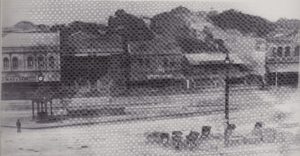 The Point Fire Brigade staff with their fire engine. The fire station was as 158/ 160 Point Road. 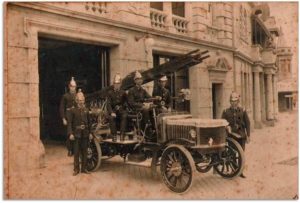 A postcard of the time showing the Da Gama Clock, a Durban Tram and the tower building in the background. 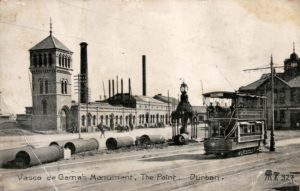 The two photos below are interesting in that they are of the same time period. I was trying to get my head around them as if you look at the old picture above (the one with the sand dunes behind) it is the same area. Note that the house with the parapet balustrade on the corner still existed, the Seamen’s Institute has been changed , the house with the split in the roof still there, the next building has been added to with an additional floor and next to it the house indicated “Clark and Thistleton” ) remains. Note that the sand dunes have been removed and the area flattened. Also it looks like the Vasco Da Gama clock is being dismantled as it was moved further down Point Road towards the harbour entrance.

Looking at the picture it appears it must have been taken from a height and seeing the Union Castle liner is moored there probably at C or D shed. I am taking a guess but reckon that is the Llangibby Castle with two funnels pushed forward and not central to the ship. Cross the bow the street shown is Southampton Street with on the corner at the left , the double storey Point Police Station. The City Council Police stations used the same design and if you know the one still standing on the corner of McDonald and Manning Road you will see the similarity. At the back the building with the many windows is the Native Barracks. Behind that is Plymouth Road and from my 1938 Directory it would seem the building facing is the Durban Corporation Sewerage Works.

Left to right you are looking at the point area going down to the harbour entrance, the beach in the background being the present day Vetch’s Pier area. This was known later as Ocean Beach. I do not know what the building is with the chimney stack billowing smoke but that chimney remained there for many years and could be seen from Addington Beach.

Looking at the picture with the fire engine. The fire station building would have been a little further up Point Road from the Police Station. Note the building on the corner has a spire whereas in the 193os photo the spire has been removed from the building.

Maybe someone who knows the area well can add to this. 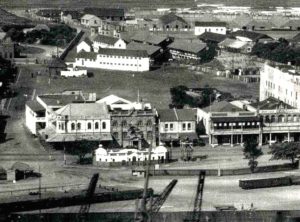 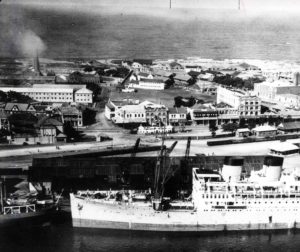 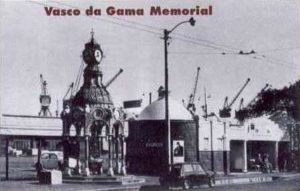 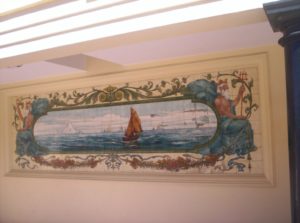 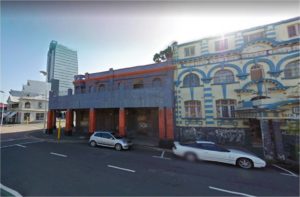 A delightful picture of the Greyville Junction. This would have been the central island that existed in First Avenue roughly opposite the Bellhaven Centre and what is now the Game Centre. The trams at this point would have detoured to the left and headed for Florida Road. I stand corrected but I think this was as far as the trams went along First Avenue. Note in the picture that the trolley busses catenary is up so this must have been towards the end of the tram era. The buses continued along First Avenue into Stamford Hill Road. Picture received from Arthur Gammage. 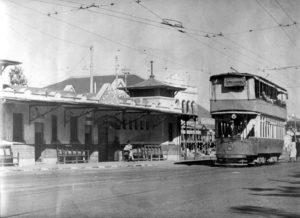