A recent visit to a holiday retreat called Castleburn at the foot of the southern Drakensberg brought up the name of Capt. Allen Gardiner. His name is mentioned in the brochure produced by the Management and brought to light something regarding Capt. Gardiner I was not aware of. I thought a few additional notes on Captain Allen Gardiner would be of interest.

I quote from the resort brochure:

The first mission station in what was then Natal was set up by a Captain Allen Francis Gardiner after his retirement from the British Royal Navy. In 1835 Gardiner explored the southern Drakensberg and during his journeys came upon a very striking and rugged mountain. It is recorded in his diary that he likened it to Edinburgh Castle in Scotland. This feature he named Giant’s Castle. In 1865, the Surveyor General of Natal, Dr. Peter Sutherland undertook the task of mapping the Natal Drakensberg and he renamed the striking sandstone mountain “Garden Castle” in memory of his mother whose maiden name was Garden and he transferred the name Giant’s Castle to the feature in the Central Drakensberg that is known by this name today. The turreted summit of Garden Castle is a landmark that can be seen and recognised from many kilometres away, even though it stands amidst a great profusion of hills that form what is known as the Little Berg as distinct geologically from the High Berg, which constitutes the great basalt bastions that form the spine of the Dragon himself.

That the mountain should first have been named by a man called Gardiner and years later renamed Garden Castle by a by a surveyor who had no connection of any kind with Gardiner is a curious coincidence that has, over the years, led to speculation on numerous other versions of the manner in which Garden Castle got its name. It is believed however, based on factual research, that the version related above is correct.”

Most are all too familiar with Gardiner Street in Durban, running from the station past the Post Office, across West Street, past the Cenotaph and City Hall frontage, across Smith Street and running down to the Esplanade. That this prominent street in Durban should be named after Capt. Allen Gardiner was in recognition of the man who in only a relatively short stay at Port Natal left his mark on the small settlement that was to become Durban. 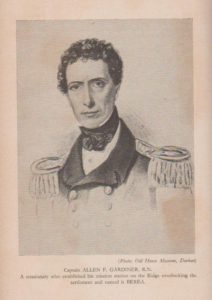 In January 1835 retired British naval captain, Allen Gardiner (born 1794 died Patagonia 1851) arrived at the fledging settlement of Port Natal following the death of his beloved wife. In 1834 at the age of 40, he pledged at his dying wife’s bedside that he would devote the rest of his life to the service of his Saviour. His intention of coming to Natal was to establish a missionary station, particularly at Dingane’s kraal, and to bring the Gospel to the Zulus.

From what is read, Gardiner on his arrival, was appalled at the lack of order at the Port Natal settlement. There appeared to be no control and so he took it upon himself to get some civic activity going and initiate some organisation.

When his request to establish himself at Dingane’s kraal was refused, he returned to Port Natal. Here the settlers requested Gardiner whether he would not consider establishing a mission amongst them instead. He agreed to this and located his mission on a chosen spot on the ridge overlooking the bay of Port Natal.

The site Gardiner chose is today flanked by Ridge Road, Julia Road and Jesmond Grove and is the site of the original St Thomas’s Church. He named the mission, Berea (see Acts of the Apostles, Chapter XVll Verses 10 & 11). On Sunday, March 24th 1835, Gardiner held his first service for the Port Natal settlers. He established a small school for African children at the mission and started teaching in thatched beehive huts. At the time there were no European women and children at the Port Natal settlement.

On June 23rd 1835, Gardiner called and presided over a meeting to discuss the development of the settlement. The meeting held at the residence of Mr F. Berkin was attended by 15 settlers and it was decided that the settlement should be named D’Urban in honour of the then Governor of the Cape Colony, Sir Benjamin D’Urban. The area as a whole was to be named Victoria in honour of Princess Victoria who was to accede to the British throne two years later in 1837. One reads of Victoria County. Matters discussed at the meeting included rules as to how business was conducted and as to the standards the settlement was to uphold. No longer were grass and reed huts to be used as accommodation except for servants and a fund was set up towards the clearing of the bush and town improvements. A fund towards building a church was also set up as well for a school. A Town Committee was put together consisting of Capt. Gardiner and Messrs. Cane, Ogle, Collis and Berkin. Although some of the ideals were rather lofty, Sir Benjamin D’Urban supported the cause albeit at this stage he held no jurisdiction over the settlement except that the settlers were British subjects. An attempt by Sir Benjamin D’Urban to Lord Glenelg, Secretary of State for the Colonies in England, to seek annexation of the settlement by Britain was turned down.

Gardiner must have been disappointed with this decision as in 1836 he returned to England and presented the case giving evidence before the House of Commons Select Committee on Aborigines.
Again matters did not go his way and in 1837, he returned to Natal only with a commission to exercise magisterial control over the British subjects at the settlement. His powers only related to the British subjects and he had no powers over the African population.

It was on this return journey that his 12 year old daughter, Julia accompanied him. Sadly en route Julia fell ill and died just as the ship was approaching the harbour. Her body was taken and buried in the grounds of the mission station. Julia became the first white child to be buried in Durban. Her grave still exists in the small cemetery on the mission site in Ridge Road.

In Memory of Julia, daughter of Capt. Allen Gardener (sic) R.N.
First English Missionary to the Zulus. He resided near this spot in 1835 and named it Berea. His daughter was buried here May 12th 1837 . He went on to found a mission in Patagonia where he died in the service of his Saviour.

The inscription at the bottom of the tombstone reads :

“ But soon the living stream she found
Redeemed in love allayed her fears
And bore her safe to Canaan’s ground.
And now she hymns the angelic strain,
Worthy for us the lamb was slain. ”

It appears that the bottom inscription became detached from Julia’s tombstone and was found by William Hartley in George Christopher Cato’s home acting as a doorstop. In 1864 Christopher George Cato donated the land to the St Thomas’s Church and restored the inscription back to its rightful place on the tombstone.

Gardiner on his return brought with him, a Yorkshire clergyman, Rev. Francis Owen who was tasked by the Church Missionary Society to inaugurate a mission at Dingane’s kraal. In the same year on the 19th October, Piet Retief and the Voortrekkers arrived in D’Urban and they were welcomed by the settlers. In November of the same year, Piet Retief was received by Dingane for the first time in connection with the request for a grant of land. It can be assumed that Gardiner and Retief would have met in person.

The mission established by Owen was not a success and ended with the murder of Piet Retief and his party on their second visit to Dingane on 8th February 1838 . Owen witnessed the massacre from a distance. Thereafter Owen returned to D’Urban a few days later and left Natal in 1838 never to return again.

Early in 1838, Capt. Allen Gardiner’s influence over the settlers began to wane as he was being superceded by one, Alexander Biggar. In the same year, he left Natal for good. It is written that Gardiner continued his missionary work in the Far East but eventually ended up at Tierra del Fuego (Patagonia) where he attempted to found a mission. He died there of starvation in 1851.

Notes taken from the following books:

Port Natal A Pioneer Story by Janie Malherbe
Origin of Durban Street Names by John McIntyre
A History of Natal by E.H. Brookes and Colin de B Webb.