Arthur Gammage wrote in with a query about the Hotel Cecil: 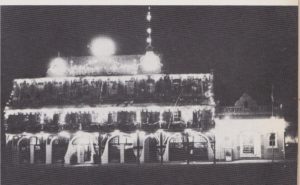 Please will you publish this photo on fad and see if Bob Gooderson or anyone else can date this celebratory illumination of the Hotel Cecil complete with Union Jacks, or has another image of the hotel. It was at 14 West Street, adjacent to the Beach Hotel in its second manifestation.

On the right is the Electric Theatre, an early cinema. Behind at first floor or roof level is a Union period gable, which closely matched those on the Beach Hotel before it was replaced by the present multi-storey building.

Both Gerald Buttigieg and I remember a ZUT Boutique towards the end of West Street. Our family also used to watch 8mm films at home, rented from a shop in this location.

In the 1970s the old Cecil building was altered for the Mykonos Restaurant.

I am researching some buildings shown along the Addington portion of Point Road on the Durban 1892 map. On the corner of Point and Hospital Road was a Presbyterian church, designed by Philip Dudgeon, who designed the first Town Hall through a competition entry. Maria Helena Martin in her thesis on Dudgeon, speaks of a prolonged and fruitless search for a photograph of the building, other than a few remnants after it had been replaced by the existing little Presbyterian Church, on the narrow part of Smith Street leading one-way onto Point Road. A three storey hotel was built on the street corner, masking the Gothic style church, which by 1931 was being used for Zulu services.