A couple of posts back, Ariel Rudolph wrote in to ask about signs on the Bluff near the  restricted military area. Legend has it that there was a sign saying that one was leaving Durban and another welcoming you to Pinetown.

I have since has a couple of responses including one from Andre who also asked:

Can anyone throw any light as to why, at one stage, the end of the Bluff (harbour entrance side) was known as Pinetown? Photos depicting this will be appreciated.

And there was  a response from Keith Titmuss who wrote: 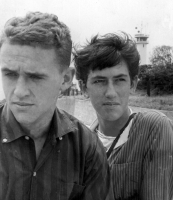 I can confirm that there were two signs at the end of the Bluff next to the Viewsite, which was close to the old Signal Tower. The first sign was Exit from Durban and a few metres further on there was another sign “Entrance to Pinetown”. This is a fact. I lived most of my life on the Bluff and my friends and I often went to the viewsite before it was closed by the military. I have attached 3 photos taken in the early ’60’s…unfortunately I cannot find a picture of the Pinetown sign, but it was there.
Pic 0001 is me Keith Titmuss, Pic 0002 is Denys Peel, Pic 0003 Is Vinlea Jonker and Denys Peel……notice the Bluff Signal Tower in the background.
Kind Regards,
Keith Titmuss

Anyone have more information on this at all?