Keeping up with my resolution to add something to FAD monthly, this month I am taking a cue from John Taylor’s post about Musgrave Centre. Henwoods will only be a name familiar to those who knew Durban as it was prior to the 1970s as sadly after that the name Henwoods and its familiar logo have since disappeared along with many other old Durban names. I am posting a bit of Henwood’s history again from an excellent book I found in Pietermaritzburg at a second hand outlet. The book is titled Natal Municipal Association 1904-1964 Diamond Jubilee.

My own memories of Henwoods goes back to the mid 50s when Henwoods traded in West Street virtually opposite where Adams Book Store stands today. Adams by the way must be the last relic of the old time stores in Durban and deserves a write up in FAD. Henwoods was if I recall in the 50s a normal department store. It had a very good hardware section as well as a sports goods section. I do not recall it having a grocery or food department but I may be wrong.

The shop did stretch from West Street through to Pine Street and was not multi storeyed. I seem to recall it did not have a very modern frontage and the interior was distinctly old style as were many of the old department stores in those days. Wooden floors, darkish interiors, lots of counters with their attendant assistants. I stand to be corrected but I seem to recall that one side of the shop was actually an arcade called Henwood’s Arcade and this arcade disappeared when the site was redeveloped. Someone can correct me on this.

I am not sure either if Henwoods had the centralised cash collection system where when making payment your money and the invoice were whisked away to a central point via a pneumatic tube system. I recall Greenacres had this as did The HUB and I think Ansteys. I do not think it was in place in Henwoods.

My one distinct memory of Henwoods was buying a pair of Adidas soccer boots there. They were one of the first sports shops in Durban to have what was then a brand new “brand” if the word existed then. The boots, all leather, were imported from Germany and had the distinctive marking of the three stripes which exists still today. They were boxed in a blue cardboard box with the name Adi Dassler, who was the originator. That was about 1958/59.

The reason why Henwoods eventually closed down is unknown. I seem to recall that when the main West Street outlet closed down probably some time in the early 70s, they relocated to other premises outside the CBD. I remember the branch at the Musgrave Centre which also had a branch of Adams Book Store. The Cornish Hen sitting on the log obviously alludes to the surname as well the link to Paul Henwood’s origins in Cornwall England.

Going by the notes in the book Henwoods in 1964 had already notched up 110 years of continuous service. Sadly it is another pioneer name that has disappeared and one wonders what happened to the later generations of Henwoods. 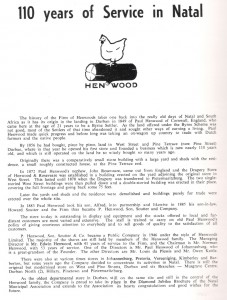 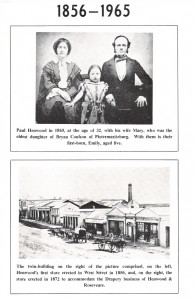 I have no photos or pictures of Henwood’s as it was in the 50s/60s so if anyone does please email them to Allan Jackson who can add them to this post.