I have been unpacking boxes and, among my stuff, I discovered this First Day Cover commemorating the centenary of Durban becoming a borough. I had forgotten that I even had it but here, at last, it is. 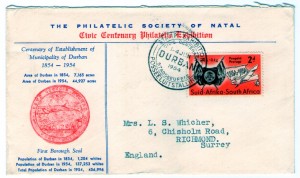 It brought back a sour memory or two, when I contrasted the 100th celebration with the stunning burst of indifference which greeted the 150th anniversary in 2004. The sad fact is that the city authorities totally ignored that milestone, as they did the fact that the Metro (City) Police had also turned 150. I mentioned this in diary entries at the time, here and here.

Talking of the City Police reminds me of a long-standing oversight. At the time of my initial research into Durban’s history, it was commonly stated that the Durban City Police was the oldest police force in the Southern Hemisphere.

That ‘fact’ did make it into print all over the place, including Facts About Durban, and I’m indebted to reader Peter Gaffney, once the force’s Deputy Chief Constable, for the information that this isn’t so. Turns out that the Royal Falkland Islands Police predates Durban’s force, having been established on November 1, 1846.

By coincidence, the Falkland Islands were once adjacent to the KZN coastline, as readers of my article on Durban’s geology will remember.