I have been given a massive amount of photo copies of newspaper cuttings, pictures copied from books etc. etc. all related to Durban. Unfortunately there was no order to this accumulation and I have to sift through it which is going to take some time.  A considerable amount of time and trouble went into getting this mixed collection all together. What the original intention was I am not sure. The collector who I know indirectly was obviously keen on Durban and copied whatever came his way.  My intention is to post pictures which mean and remind me of  something and hopefully to the reader. Rather than make one enormous posting I am choosing random pictures and will post them in a series called Durban Pot-Pourri starting with this one as Number 1.      Click on pictures to enlarge. 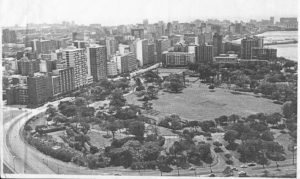 Albert Park before the overhead Southern Freeway was constructed.

Albert Park prior to the Southern Freeway Overhead.

Probably one of the most popular rendezvous in Durban was the Tropicale . Run by the Poulos family, the restaurant was incredibly popular for its Sunday lunches whilst its open parking site service was known to everyone, families, dating couples and a general get together venue. It is pictured here in the left hand corner partially hidden by the trees. The Albert Park Oval and Football field was in constant use.  A spectators stand was built and this can be seen overlooking the field. There was a Sunday Soccer League going in the 60s / 70s and inter business office cricket games were popular.  The Albert Park Bowling Club, greens shown, had a strong membership. Tennis courts were added later.

My memory during school holidays is walking down Moore Road and heading for Albert Park, crossing it and the Esplanade, then the railway lines to get to the I and J Fisheries Wharf  and spending the day fishing. In later years when dating became more important, one would go to NAWRA (Natal Anglican Women’s Association) House and ask at the reception if any girls were interested in a blind date.  Some girls were game.  Still recall you were not allowed to cross the threshold there and there was always a resident on “front door duty”! 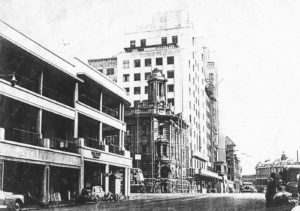 A 1940s picture of the corner of Smith and Gardiners Streets. The Station and Natal Bank building in the back ground. The Trust Building under construction with the Old Mutual Building completed.  Then the Baltic Building on the corner. This was the HQ for Hunt, Leuchars and Hepburn a timber firm, importing timber as well as the manufacture of doors and windows etc. This building was demolished in the mid 50s and replaced by the Allied Building Society which still stands today. Opposite was the Imperial Building which later became the site of the United Building Society and now ABSA.  The Waldorf indicated was a tobacconist. 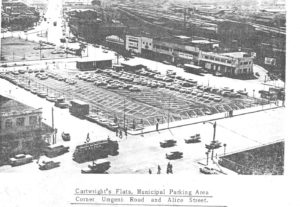 Cartwright Flats was a sandy square when I was much younger and remember it from the days of travelling to and from town on the trolley buses to Sutton Park.  It was bounded by Umgeni Road, Alice Street and Albert Street.  Alice Street at the juncture ended and became  Old Fort Road from there on down to the beach.  Apparently from what I have read, the open space was used as an auction place for horses, donkeys and draught animals.  In the 50s it became the venue for Boswell’s Circus and always remained a bit of a scruffy unkempt square. This picture looks like mid 50s early 60s when the area was converted into an open air park and ride. You paid for leaving your car there and took a bus into town. What is interesting is the row of buildings skirting what is Umgeni Road.  The building on the right was remodelled and became the Cosmo Night Club.  The Club developed a bit of a dodgy reputation as I recall. In the distance Umgeni Road is joined by First Avenue at the Y. Trolley buses from town would come along Albert Street (bottom half of the picture) and proceed to First Avenue and out to Greyville.  The building on the bottom left hand corner I recall had a Karate School upstairs in the mid 60s.  This whole area is much changed today. 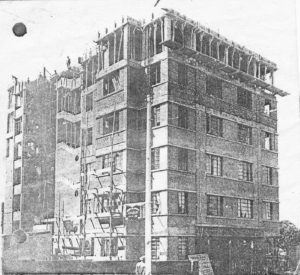 Anyone who lived in the vicinity of Berea Road somehow knew Eureka Court as a type of marker. It stood at the top commercial end of Berea Road before you came to the Berea Proper. On the back of this picture is noted “circa 1950  11 storey being built for ex-servicemen. “  Whether this was a Durban Corporation initiative I do not know but it may well have been. Knowing the area as a young teenager, Eureka Court was always talked of as a “rough and ready” place.  The Grand Tea Room notable as a meeting place for the “ducktail“ bikers of the day was not far from Eureka Court. An interesting picture of a building under construction that is still standing and survived the dramatic changes that came about with the coming of Kinmont’s Canyon. 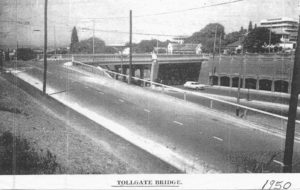 One picture that has always eluded me is a picture of the original Toll Gate Bridge that I remember.  It is well known that at this point in Berea Road, at one time in the distant past a toll was charged for entry in and out of Durban.  A dusty single road then, a house was built in the vicinity for the toll gate keeper and his wife. The toll gate keeper actually was an invalid and confined to a wheel chair.  From its earliest days Durban proper, then had four boundaries viz. the Umgeni River, the Umbilo River, the ocean and the Ridge, later defined by North Ridge and South Ridge roads. Every other area beyond these boundaries became known as Durban Districts and included the Bluff. I have no history when the two Ridge Roads were laid down but they appear to be two separate entities in the 1938 Durban Directory.  I would surmise that it was a natural turn of events that the two Ridge Roads would join to form a single road across the entire ridge and this meant an overhead bridge spanning Berea Road was necessary.  Notes on the back of this picture states : “ Poverty Bridge built with second hand materials early 1940s”.  I know nothing of this bar the date of building would seem to be about that time. 1940s were war years.

The bridge is shown as I remember it. A plain bridge with distinctive high walls either side to retain the banks of the cutting. The picture shows the van going into town.  The trolley bus (the catenary I see is mounted) would come up the ramp road shown, turn right, over the bridge and left to enter Berea Road again and head for town.  Missing from the corner looking at the house with two gables is a block of flats that stands there today called Rohallion.   In later years on the left hand side of the cutting, a water feature something like a small waterfall was erected by the Parks and Gardens. Eventually this whole bridge structure and Berea Road was remodelled in the Kinmont plan resulting in the new arched Toll Gate Bridge and the complete redesign of Berea Road.