Commemorating the Arrival of the Byrne Settlers 1849.

12th May 2019 marked the 170th anniversary of the arrival in Durban of the vessel, Wanderer with the first boat load of Byrne Settlers. In 1849, 15 Byrne Settlers amongst 108 passengers arrived off the Bluff. Entrance to Durban Harbour was very risky because of the sandbar and instead the preferred method of disembarkation was for passengers to transfer to a long boat and then be rowed ashore to the landing point which was the beach roughly where the ferry and pilot boats dock today. Ladies and children were then carried ashore piggy back style by Africans.

The history of the Byrne Emigration Scheme is well documented in history and other books. In all some 20 sailing vessels of varying sizes left England under Joseph Charles Byrne’s Emigration Scheme and a total of 57 vessels brought close to 5000 settlers to Natal. The idea of the scheme was to bring over suitable immigrants who would leave an England troubled by depression, the effect of the Industrial Revolution on cottage industries, the movement of the country population to the larger cities looking for better paid work, crime and lawlessness in the cities, and a country in decline.
The attraction was a distant British Colony with ample fertile land, a good climate, and lots of potential.

In 1843 Natal had been declared a British Colony under the control of the Cape Government. This annexation had led to the second Great Trek, when the boer trekkers who had arrived with the 1835 Great Trek and settling in Natal, found themselves again under British rule and decided to abandon Natal and join up with the trekkers who had settled northward in the Free State and the Transvaal. They abandoned their farms leaving Natal unpopulated. The Scheme was “advertised” in England by means of meetings held in various parts by Byrne’s agents. The response was so good that Byrne took on an out of work surveyor, John Moreland to act as his Natal Agent. He was dispatched to Natal in the second vessel, the Washington. Moreland arrived with his two sons and set up an office in Stanger Street. Moreland’s task was to find suitable Crown Lands that he could purchase on behalf of Byrne as well as be his agent for those arriving in the ships coming out from England.

The terms of the Scheme were such that for a set amount of £10 this provided the emigrant a steerage passage to Natal for him and his family, and on arrival he would be allocated 20 acres of land in an appointed area supplemented with an additional 5 acres for every child. In addition emigrants were allocated a half acre plot in a “Village” with named roads and a village common which was drawn up on paper only. This one assumes was to engender a spirit of community amongst the emigrants.

Moreland had set about touring Natal on horseback looking at abandoned Boer farms and purchasing land. To this end he purchased land in what today are the Richmond/ Byrne area, Verulam, Mount Moreland, New Glasgow, farms around Pietermaritzburg, Thornville, and York. Moreland being a surveyor also had to subdivide the land bought into plots and farms to be allocated to the emigrants on arrival. Possibly the biggest successes were Richmond and Verulam. Richmond at one time was the third largest town in Natal after Durban and Pietermaritzburg. Some were failures such as Byrne which never developed into a Village till 120 years later. It is remarkable that when the Village of Byrne which was developed as a farm, was bought by developers in 1971, the developers used the original 1850 village subdivisions to sell off the plots individually.

Conditions were tough for the emigrants. The land allocated was some distance away from civilization being Durban or Pietermaritzburg and the “Village” idea was what it was, only on paper. The bush and land had to be tamed, the heat of the day coped with, water fetched and carried, wild animals contended with. Life was tough and many allocated land in these outposts abandoned them returning rather to try their luck in Durban or Pietermaritzburg.

The Byrne Scheme only lasted till 1851 but in the short space of 3 years, the emigrants that did come to Natal were by and large the initial impetus that got Durban in particular and Natal in general progressing to the fine city and province they eventually became.

For interest the names of the first 15 Byrne Emigrants who arrived on the Wanderer are:

The wreck of the Minerva on the far side of the Bluff 1850.
The Minerva was the largest vessel chartered by Byrne and carried the most emigrants, 287. The Minerva left London on 26 April and arrived off Durban on 3 July 1850. Also anchored in the road stead was the Conquering Hero that arrived on 28 June 1850 and the next day, the Henrietta arrived on 4th July 1850. On board the Minerva was John Moreland’s wife Ann, his daughter Isabella and son Edward whom he had not seen for over a year. He arranged for them to disembark soon after arrival along with some others they could accommodate on that day. On 4 July 1850 disembarkation carried on but could not be completed. That night at about 11.30 pm a sudden gale blew up and the Minerva lost her anchor. The Minerva drifted towards the Bluff and ran aground on the rocks. In the dead of night a rescue operation was put into place with help from the Henrietta and the Conquering Hero crews. Only one casualty occurred; a crew member of the Conquering Hero drowning. Everyone else was rescued and made the shore soaked but uninjured. All possessions were lost when the Minerva started breaking up.

Below is a picture of the Minerva fast aground on the Bluff. I have heard this is a copy of a photo taken, apparently one of the first photos taken in Durban. A similar painting used to hang in the Old House Museum in St Andrew’s Street.
Click on picture to enlarge. 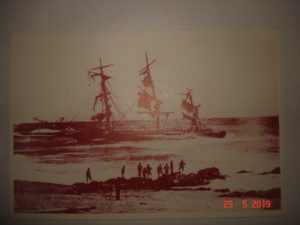 Commemorating the Centenary of the Arrival of the Natal Settlers.

In 1949, the centenary of the arrival of the Natal Settlers a special stamp was issued by the Post Office. Below is a First day Cover to mark the occasion. The stamp shows the Wanderer entering the Harbour with the Bluff in the background. Possibly a bit of design licence as the sandbar prevented sailing ships from entering the harbour till many years later. Click on picture to enlarge. 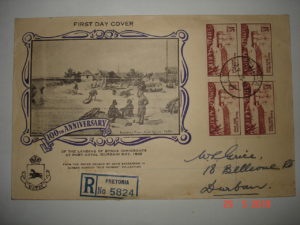