I have just had a look at the site visitor figures over the past year. According to Google we have had an average of 4618 visitors who viewed an average of 11755 pages every month. 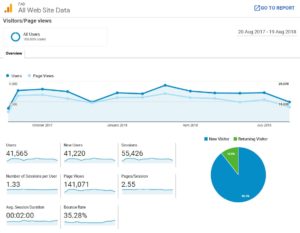 The average has been maintained for most of our 15 years of life and according to my admittedly sketchy mathematics, it means that there have been in the region of 2,116,065 page views in that time. It has been a major undertaking on the part of Gerald and myself for which I thank him most sincerely. He took care of things very ably while I was I was recovering from emigration and things would have ground to a halt without him.

You might consider donating something to the cause if you appreciate the effort being put in. If there are enough donations we could scrap advertising on the site or you could buy a million copies of the third edition of the book; that would do it too.  😉