A fire gutted an old Durban building on Saturday night, 14th April 2018. Buchanan’s Building on the corner of West Street and Russell Street was completely gutted. Those who know Durban will remember the two storey building had a gable facing West Street. The building’s location was roughly diagonally opposite West Street Cemetery and Cathedral Road. I checked my 1938 Durban Directory and the building is listed so it was an old building. I recall in the 60s on the ground floor was a furniture shop and I had to check on the name. It was was Hayden Furnishers. Sadly another oldie reduced to rubble.

I know nothing of the fire in the Lonsdale Hotel mentioned in the cutting. Maybe someone who reads this and knows can comment. 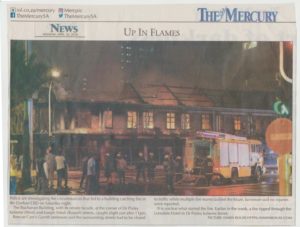 I found a picture of the Buchanan’s Building showing the building as it was. Click on picture to enlarge. 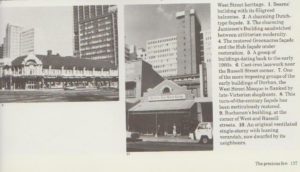