Cricket was never my game at School but I was Scorer for the Second XI! Back then in the late 1950s/early 1960s there were some star studded High School cricket teams in Durban, Pietermaritzburg and surrounds. There was quite a bit of rivalry on the go between DHS, Glenwood, Michaelhouse, Kearsney, College and even St Henry’s (Marist) who put up a cricket side to test the best. I used to hear that at the end of the school year a cricket week had been organised where schools competed for the honour of playing in Offord Week. Offord was a name one heard about and the daily papers used to report on the cricket week. That is about all I knew of it and never knew who Offord was.

A few years ago now, through Facts about Durban and the fact I live in the historical Village of Byrne in the Midlands, I,through the internet, met David Dallas now living in Australia. We corresponded and compared notes and it turned out that he has family links to the Andersons and the Dales of Pinetown, the former being original Byrne Settlers. The Byrne Settlers were the original immigrants who came to Natal from England in the 1850s to start life anew in a different world. One could say their arrival was the spark that saw Natal in general and Durban in particular progress immensely from what had been a shaky start. This shaky start is even referred to in Durban’s motto, Better fortunes follow a humble beginning.

Just recently David Dallas contacted me that he was writing the life story of his maternal grandfather, Charles James “CJ” Offord and promised me a copy once he had published it. I duly received my copy and what an extraordinary life Charles Offord had. As an educator he was associated with the Government schools in Pinetown, Estcourt, Howick before his final appointment as Principal at the Mayville Government School in Mayville, later to be renamed West Ridge Government School. He served as Principal from 1915 to 1931 when he retired.

After retiring he devoted his life to his first love, Cricket.

For those interested in Cricket this is a delightful book, even more so for those who actually participated in Offord Week and later Nuffield Week.

In speaking with the author, I agreed to mention the book on Facts about Durban because of the links Offord had to Durban. To get hold of a copy of the book, the best way is to contact David Dallas via email and make your own arrangements. The pictures I have added are the front and back covers.
The author’s email contact address: dbdallas@pac.com.au 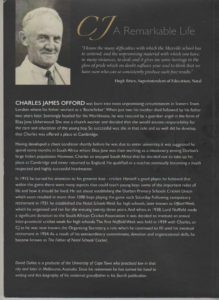