With the rather inclement weather we are having in the Midlands, and my youngest granddaughter staying with us for a short while, we decided to go and visit the kwaZuluNatal Museum in Pietermaritzburg. She has never been to a museum. It is housed in a wonderful old building and dates back to 1904. I am certain some of the exhibits are from that era as well. But interesting it is and I learnt a new fact about Durban there. One often thinks that Nellie the elephant that lived at the Mitchell Gardens Zoo was the first elephant to reside in Durban. Well she wasn’t; Big Bob was her predecessor and Big Bob now resides in the Museum in Pietermaritzburg. The information card did not copy well but here is the narrative:

” This Indian Elephant known as Big Bob (sometimes called Tommy) was one of the drawcards at Durban’s Mitchell Park Zoo in Morningside early last century. In 1918 he was shot after trampling his trainer and the carcass was donated to the Kwa Zulu Natal Museum. He was prepared for exhibition by the museum’s taxidermist, Mr Fred Tescher.

People often confused Bob with his successor, Nellie a gift from the Maharajah of Mysore India in 1928. Nellie was retired in 1948 and donated to the Taronga Zoo in Sydney Australia.” 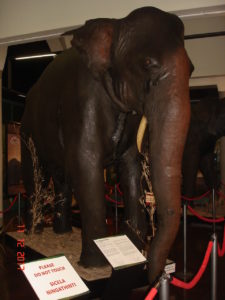 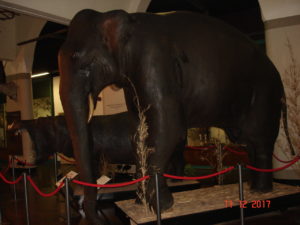 Photos of Big Bob in the Museum. Click on pictures to enlarge.