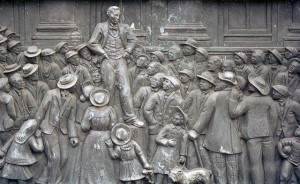 Some time ago Patrick Coyne asked about the plaque that was at the Durban Post Office. I remember it well as it was on the right hand side looking at the frontage. It was mounted on a small stone base and in later years due to the foliage around it having grown, was rather hidden. I have not been around there for some time to see if it is still there or has been moved to the “Colonial Cemetery”.  John Dube, a regular FAD contributor has sent me two photos, one of the plaque itself and another of the monument site where the armoured train was derailed by the Boers and Winston Churchill captured. The location was near Chieveley Station which was on the plain near Ladysmith. The capture took place on 15th November 1899. Churchill was taken to Pretoria and imprisoned in the old Gymnasium School there. He managed to escape and made his way to Lourenco Marques and from there made it to Durban where he addressed the townsfolk from the steps of the then City Hall which is now the Post Office. 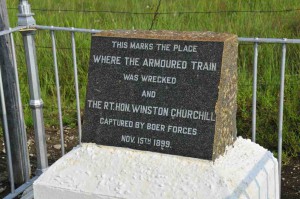 Added by Allan on February 6, 2017: I just received some correspondence from Arthur Gammage who worked for the municipality on the Churchill plaque at the Post Office. He wrote: 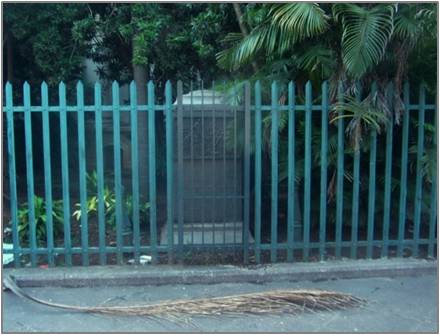 “The column with the plaque is at the south east corner of the site, in an open planted space next to the Church Street plaza. The Post Office had a steel palisade fence erected as the garden strip was continually littered. About 2010 we had a portion of the fence replaced with a steel grid to make the column more visible. The bronze relief plaque is quite exceptional, a young Winston addressing a crowd and there is a girl in the foreground with a bulldog on a lead.”

I hadn’t noticed the girl with the bulldog before. It neatly foreshadows Churchill’s later life when he became the epitome of the British Bulldog spirit.