We’re going to try an experiment but don’t be worried, it won’t hurt at all.

Regular contributor Gerald Buttigieg sent in a story (a loooong time ago) about Durban’s dairies and bakeries that he dug up from his memories and a book. There is no facility for people to add their own memories to the regular pages on the site and so the experiment is for you to:

READ THE STORY HERE AND COME BACK AND LEAVE YOUR COMMENTS BELOW.
I’ll kick things off to show how easy it is….

Reader Elaine Howson sent in a contribution to this post a shamefully long time ago. I lost it and have only recently rediscovered it and so here it is:

My Great Grandparents Thomas Henry Aitken and Margaret Aitken migrated from Dunbar in Scotland with their two children Francis and Evelyn in 1903 to Durban, South Africa. They ran a dairy at Springfield for maybe 9 years as Margaret passed away in July 1913.
Thomas Henry, Margaret, Francis and Evelyn are all in the photo. The elderly gentleman is Archibald Aitken, Thomas Henry’s father who visited them from Scotland. Thomas and Margaret are both buried at Stamford Hill Cemetary [now known as Umgeni Cemetary].
I hope this is useful information
Yours sincerely
Elaine Howson 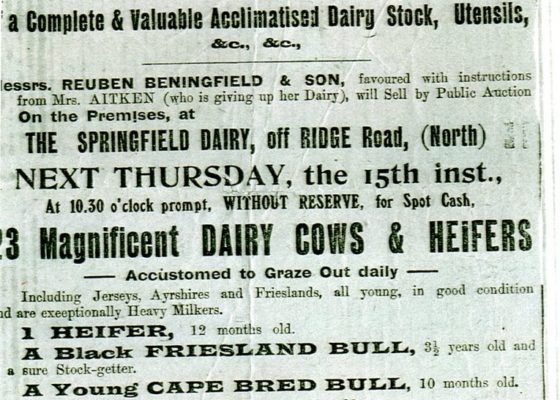 Advert publicising the sale of the Springfield Dairy. 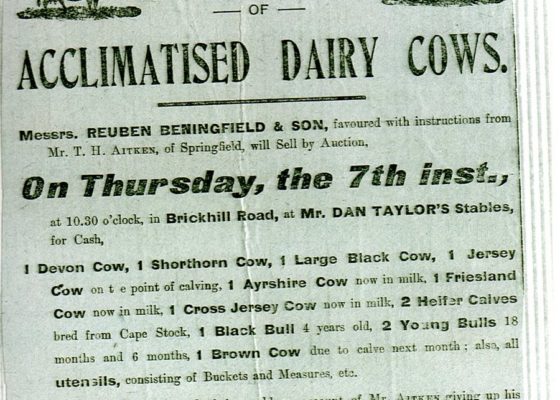 Advert publicising the sale of the Springfield Dairy.
Share this: