Bob Gooderson asks if anyone can remember the name of a hotel that has slipped his mind. He wote:

Does anybody remember the name of the hotel which stood on the site where Marine Parade Post office is now sited?

In 1957 when my Dad family purchased our first hotel, the Lonsdale, I was installed as manager. We had Jack Bartram playing the organ in the ‘Lonsdale Lounge’ and Cashel Kelly was the singer.

On nights when it seemed quiet I used to walk round and check on how many people were in the Palmerston and then up the road to the [other] hotel where the owner or manager played the piano and his wife sang with him. I seem to remember that she was a soprano. Neither my brother Alan nor I can remember the name of the hotel, who does?

Bob also sent in this picture of the beachfront which, he says, has the following inscription ‘Photograph by D.John Lucey Studio, 22 Albany Grove, Durban.’ and the reference number 61-6  52-A. He surmises that the picture was taken in 1961. 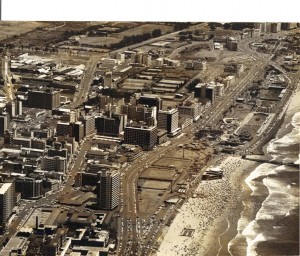