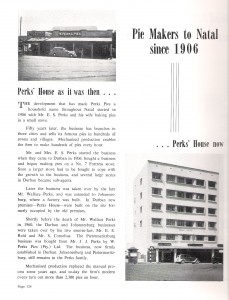 I know Durban lays claim to the Bunny Chow but in the 50s / 60s, my diet, and I would be safe to say that of countless others, was often supplemented by Pie, Chips and Gravy. This would have been true whether you were “having a graze” at the Cuban Hat, The Nest, XL Tearoom, Noddys on the beach front, the OK Bazaars Milk Bar, Greenacres Lounge, The Three Monkeys, the Roxy / Oxford Bio Cafes, the Varsity refectory or one of the small eateries / tea rooms in and around the CBD.

Pie, Chips and Gravy was a cheap menu standard. At the beachfront it was round about 15 to 20 cents a serving.  Most of these places relied on one firm to supply and that was Perks Pies, which was a name synonymous with a steak and kidney pie in Durban. That was their forte and I cannot recall at the time having any other choice such as chicken, vegetarian, or other filling. Pies were pies, round and with a flaky pastry top and  kept hot in a see through glass counter warmer. No microwaves in those days. The gravies were normally thick and dark brown, these of course left to the eating establishment to make up.

With pocket money being tight, PC&G was the way to go, albeit one’s hunger in those days was to some extent insatiable and one could easily have devoured a second serving. A Coke was normally the wash down beverage. Eating on the hoof, a Perk’s Pie was sold in an open grease proof paper packet printed with the name PERKS on it.

I recently bought a book dated 1964 wherein some of Durban’s well known firms at the time are included giving some of their history.  Perk’s Pies is included and the page is attached. The original building in my time had already been replaced with the multi storied building shown below. This was situated at the bottom end of Berea Road, close to the Lancers Road corner and opposite where Umbilo Road joined Berea Road.

The building’s upper floors were flats with the retail outlet at ground level. The bakery was at the back of the building.  Looking at the cars in the picture I would say the photo was taken soon after that building was completed probably late 30s, early 40s.

Note there are no overhead trolley bus wires in the picture.  Berea Road had an up / down trolley bus service by the 1950s,  the route being called Toll Gate. From Town, trolley buses went up Berea Road as far as the Old Toll Gate Bridge, used the bridge to cross Berea Road and then went back into town. This all changed when Kinmont’s Canyon was started in the early 60s (?) and Berea Road, which was a wide 4 lane road divided by a treed centre island was changed for ever. The old Toll Gate bridge was demolished and replaced with the present arched bridge we have now.

Perks Pies as far as I know no longer exists and perhaps someone could fill in the later history of the old Durban firm.