Readers of this site, between them, know everything and even the most obscure of facts eventually surfaces. The latest example refers to the the diary entry on site dated 13 March, 2005, where I posted a picture of a mysterious helicopter photographed off Scottburgh by reader Marius Beytell. A little research revealed that it was a Russian attack helicopter but  we never found out where it cam from, and what it had been doing.

Just the other day, reader Peter Noci wrote in to cast light on the mystery. I have added his comments below the entry for 13 March, 2005, on Diary page # 18. 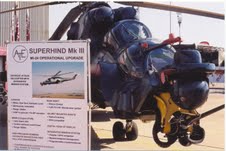 And talking of the diary, even though this shiny WordPress blog only dates back to the middle of 2011, I did keep a site diary from 2003. I recommend you take a look through those pages which are linked from here, to get a good idea of what’s been happening on the site, since the very beginning.