Allan Hannah, a comparatively recent convert to to FAD, has sent a couple of e-mails. In answer to a recent question about the Cosmo and Firefly nightclubs, he wrote:

Just had a look at the FAD site for the first time!

Having lived in Durban for short periods during my life, I suppose that I can lay a small claim to being a Durbanite!

If my dates are correct then I believe that I completed my matric year, as a border at a Durban school around about the time you were conceived!

I remember the Cosmo quite well – probably not for all the right reasons! The club was upstairs, in a building on the corner of Old Fort and Umgeni roads, adjacent to the railway tracks that led to the old Durban station.

The interior was strange inasmuch as there were numerous pillars dotted around the edge of the room. On reflection, I think they were there to support the ceiling rather than to decorate the room! If I remember correctly the Cosmo was a “late night club” that was open into the wee hours of the morning and it seemed to me that the club only got busy towards midnight! We made the odd visit to the club but at the time, being of a tender age, I must confess that the “big breekers” that frequently the club made me a little nervous.

Smugglers was “the place to go” in the old days! I think that I most visited Smuggies when I was a young sales representative and needed to buy the odd client a lunch and watch the lunchtime show! At the time, Smuggler’s was renowned for their curries and steaks so it was a safe bet taking a client there lunch. Oddly enough, snob value was high and you you could rub shoulders with “big shots” from all walks of life!

I have included a pic of RDLI [Royal Durban Light Infantry HQ. Ed.] and some of the older cars on show: 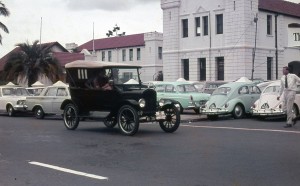 I must say that I am fascinated by the FAD website and I am trying to read as much as possible about “old Durban”. What a pleasure having someone like Gerald Buttigieg on board – and such a prolific contributor as well! Gerald and I go back quite a way and I regarded him as a great friend – and my go to pal when the old Kodak Brownie didn’t do what was expected! Well, maybe not quite the Brownie era; I think that I owned a very second hand Konica in those days.

I am sure that Gerald was responsible for the enlargements of our wedding pics, black and white of course, which were taken by Roland Judais who has since passed on! In any event. Gerald was very kind to Lynne and I and he was always ready to give a helping hand –that’s Gerald! I hope that he remembers the Hannah’s and I am proud to say that we have passed the 45 year test so I guess the next milestone is the big 50 (years of marriage. that is!).

Looking at the articles on the website I had tear in my eye when I read of all the old spots in Durbs and how so much fun was had by the old ballies of today! Somehow I never came across anything about the Los Angeles where Maureen Donne and The John Drake Trio kept us entertained for years. Also, there seems to be some confusion about the Mayfair Hotel, adjacent to the Playhouse and where The Supper Club was situated. The resident pianist was well known – was it Eduardo Jaime?? He had a decided limp but this didn’t interfere with his ability on the ivories! I think that it was here that I heard Cornelia sing the song about Pebbles??

What about the jolly old Model Dairy, just opposite the station, I think. where we used stop just about every workday and have an “Anchovy Toast” and a cup of coffee – just to set oneself up for the day, so to speak!  At the same time you could slip a sixpence or a shilling into a box on the counter and select 2 or 3 of the latest tunes to be played on …..I forget what the wretched thing was called!  (Jukebox??? Ed.)

Godfrey Mocke, Lester Kitto and I am sure there will other names that bring back memories – each name having a story and a place in the history of Durban! Before I become the proverbial bore I will sign off with best wishes to Gerald and, just maybe, we may get an invite to visit OAB!