Something rather different this time and though not strictly “Facts” about Durban it does relate to life in Durban a startling 75 years ago. It is often spoken about that Durban at one time in its history was one of the few cities in the world that was completely debt free. I think all credit for this must go to what was known as the “Durban Corporation”, the administrative organisation that looked after this city from its earliest days. 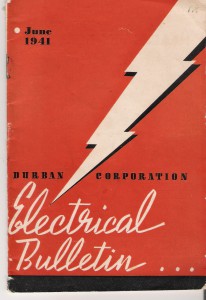 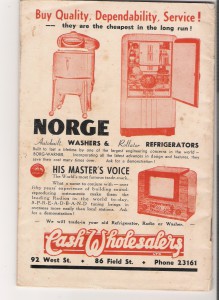 The front and back cover of the 48 page booklet.  I wonder how often they were issued.

Some time ago, a friend of mine was going through his late mother’s papers and found a little booklet issued by the Durban Corporation in June 1941. It is called “Durban Corporation Electrical Bulletin”. Knowing of my interest in Durban, he gave the booklet to me. The booklet is in excellent condition for its 75 years and if one thinks back, 1941 was two years into World War 2 so it was a time of hardship and tough times. I find it surprising that the Durban Corporation would issue such a booklet when resources would have been limited as war time supply was strictly controlled. However the booklet seems to have been a free handout and no doubt distributed freely to all Durbanites. The book was printed by the Home Journal Press (see their advert below) whose offices at that time were in Saville Street. Saville Street is an obscure little street running from Grey Street to Davis Lane. Davis Lane is that small lane that runs diagonally into West Street near the West Street Cemetery. By 1968 the Home Journal Press had moved to St. George’s Street. I have my doubts that it still exists today.

The booklet covers various topics but no name of the Editor is given. The first topic is “The Approach of Winter. Every home should have a radiator”. Then “Cost of operating Domestic Electrical Appliances”. I scanned the two pages on this topic for interest. 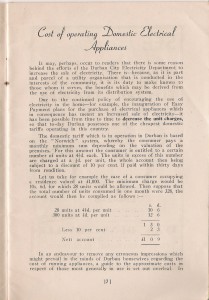 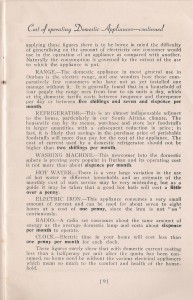 Then there “Let Electricity do your laundering” , a new “luxury” that did away with hand washing! Then there is information as to Registering Servants . Then how to make use of the “Corporation Easy Payment Plan” . This was a means of paying off the purchase of electrical appliances by taking a loan from the Durban Corporation. A deposit of 5% was required and interest charged was 6%. The Durban Corporation would pay the supplier, approved local firms, in full and recover the instalment from the purchaser. Loans started at £10 (Rand 20 equivalent) ! Then there is a section on Recipes and How to report street lights out of order. Then there is a section written in Zulu for domestic servants to read about “The Economical use of Electricity”. Then an article by Edward Dunn on Municipal Music ( I forgot Durban had its own Municipal Orchestra). Then “Durban’s Floral Wealth” by the Director of Durban’s Park and Gardens, Mr. P. Robertshaw. Finally an article on The City Reference Library by Mr Franklin Rooke , City Librarian. The booklet ends with a warning “Unauthorised Additions to Wiring”.  Obviously the Electricity Dept. were aware of illegal connections even then!!

Amongst the pages were adverts for the very latest electrical domestic appliances available. These adverts were placed by the “approved local firms” and I recall most of them still carrying on business in the 1960s/70s. Today though, many of them no longer exist. For the record, I think most of the major suppliers are shown and the wares they offered.. What is nice as well is that the addresses from where they operated is given. I love the advert on the “porcelain enamelled ” steel kitchen. Times have changed. Many homes I recall had enamelled tables in their kitchens in the 60s.

I hope this glimpse into the past recalls some memories for the “older” ones.

The adverts in the booklet relating to appliances. 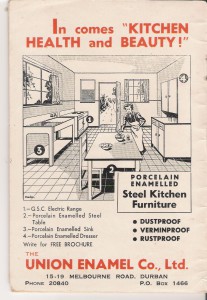 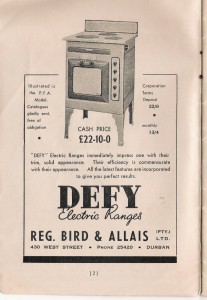 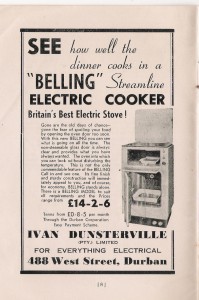 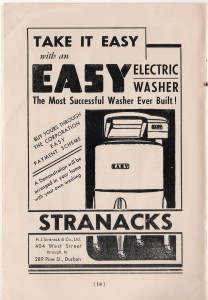 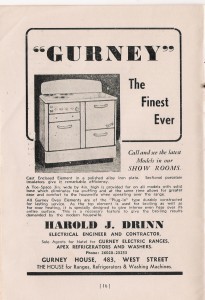 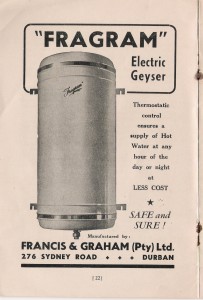 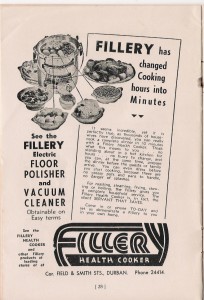 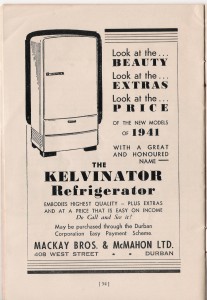 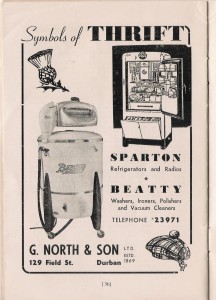 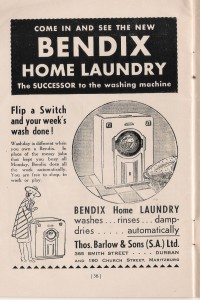 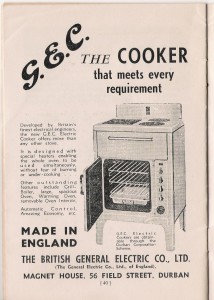 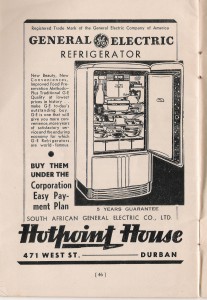 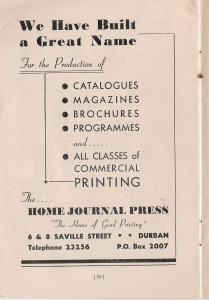 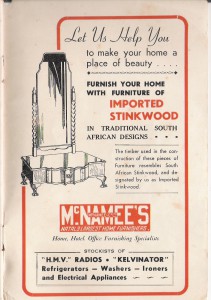 McNamee’s were a well known furniture store that had their own factory. They had a large outlet in lower West Street (near the present day SARS office).  I wonder how many of the “shabby chic” white painted ball and claw furniture items of today do not have the McNamee label they used to affix to their furniture.