Firstly, an update on a request published a while for Helena Beisheim ago on the origins of the house San Kellind. She has now sent in a picture and I have added it to the page here. 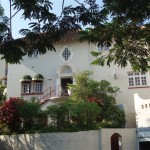 Reader Rob Stayt has been in touch with a request for info about Electra House:

Seemingly I have set myself an almost impossible task. I am trying to research the history of the Submarine Telegraph cable station, ‘Electra House’ in Accutt Street. I worked for the Post Office starting in 1967 and I made several visits to Electra House on Post Office business. The PO networks information was stored there and was available to us for underground cable data for telephone maintenance. During most of my visits I would peek through doorway into the Telegraph Office and see the beautiful old telegrph galvanometers etc. mounted on solid bases.

Presently I am an active collector of telecommunications equipment and I am really interested in the history of the cable station. I have researched the Internet and found 1 photo of ‘The Telegraph Office, Durban, South Africa’ very unfocused one, and that’s it. I have tried Cable & Wireless Company and they have put me on to the archivist at Porthcurno Museum who hold all the company’s archives. She was very helpful and told me that their records only show a brief document relating to accommodation quarters for telegraphic workers, and nothing else.

Rob’s surname struck a terrific bell when I first saw it and it turns out that his father Don worked for the Mercury and was the author of Where on Earth? – a guide to the place names of Natal and Zululand. I actually have a copy of the book and missed the chance to get one that had been signed by Don and cartoonist Jock Leyden by only a minute or two.