Can anyone provide the name of the Empire flying boat in the picture below? It was sent in by reader Nicole whose grandfather was Captain Roger P Mollard of Imperial Airways and BOAC. Captain Mollard was apparently based in Durban for a while.

It seems as if the picture was taken in Durban. I don’t recognise the view [although it does look like the Berea in the distance] but the reverse of the picture has the following inscription:

Lynn Acutt was a well-known Durban Photographer, so I guess that settles that… 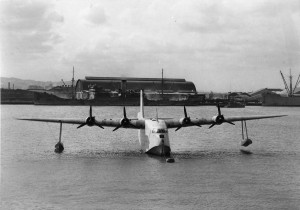 Added 18 June 2012: Capt. Mollard now has a page on this site where you read some newspaper clippings and view some of the pictures that he collected.