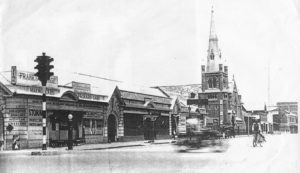 In my previous post re Hollywood Court and the cinemas, the one photo shows the corner of Smith and Aliwal Streets.  The picture I post is a close up picture of that corner where eventually the 20th Century cinema was located.  Looking down Aliwal Street we have on the corner, Franks Garage, E. Tarr, then Butler ?Gates Auto Spares and Accessories, then Fuller Batteries, a vague sign reading AYSHIRE , Aliwal St Congregational Church, then not clear but I can read a DELCO sign, then a sign reading –VERY.

Needed a bit of investigation so the 1938 Directory came out and indicated Franks Garage no longer existed but replaced by British Motors,  EE Tarr was a car springsmith, Fullers under new management now trading as S.R. Smith  & Co., AYRSHIRE was Ayrshire House,  a boarding house, the church still there, there was a residence of H W Jackson , the Delco sign belonged to Hoppert (Pty) Ltd., Auto Electrical Engineers (Delco was the name of an American auto electrical parts maker) and the –Very was a chance guess at the name Avery which I recall was the brand name on weighing scales.  Bingo!  Avery Scales 22 Aliwal Street!

The photo is written on as 1930 just before the depression.  It is interesting to look at old photos closely.  There is a blur on the photo. Possibly someone riding past on a bicycle and the shutter speed could not freeze it.  Note the robot in the road.  Adverts readable are FISK (tyre manufacturer) and SIMINOZ (a car polish) Marmo is Marmon* and Packard (American makes of car) and Goodrich (tyres). Love the petrol pumps on the pavement. Indicative of different times.  Union was a petrol additive made from sugar cane and mixed with petrol.  Union spirits I recall was still available in the 1960s. Only certain petrol stations had Union pumps.

By the 1960s, the 20th Century was on the corner, the Cameo Cinema behind Frank’s Garage was no more, Butlers and Fullers were replaced by the Embassy Parking Garage. The Church remained but further down was Donellan Rich (later Grosvenor Motors (Ford Cars) and next door was the Piccadilly Cinema and Piccadilly House. Memories of Piccadilly Cinema were the two large paintings on the walls either side of the screen. One was Piccadilly Circus and the other Tower Bridge.  My memory was the pictures were painted with a type of efflorescent paint because as the lights dimmed the pictures sort of glowed and then darkened.  The other was going there when school had broken up for the holidays and everyone went to the movies. I seem to recall the movie was Summer Holiday with Cliff Richard.

The Aliwal Street Congregational Church suffered an interesting fate. The loss of congregations of most central parishes made the churches redundant. One by one they closed doors and sold off the property. The Aliwal St Church property suffered the same fate and was sold and taken over by Roger England Antiques.  It remained so for some years till it again was sold to the Muslim community.  It was converted into a mosque, the first such transformation of a Christian church in Durban.  I seem to remember this was in the mid 2000s. 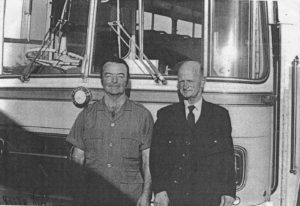 The late George Mason on the left and an unnamed driver.

This picture illustrates the wide-ranging collection of pictures I have been given.  Here is one of the late George Mason, a bus driver on the Durban Corporation buses.  He is standing with an unnamed co-driver in front of the Mercedes Benz tour bus.  I remember George from the time when the buses changed to the red single deckers and conductors were dispensed with, leaving drivers to do both jobs.

An interesting photo as it shows two venues frequently visited in the 60s but both buildings vastly changed to what I knew. 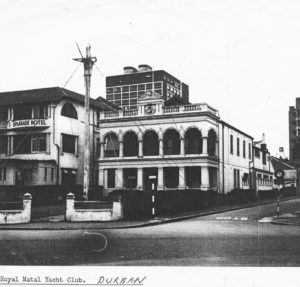 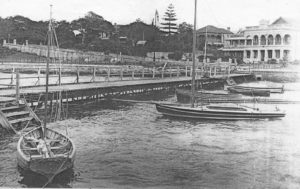 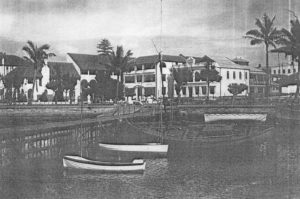 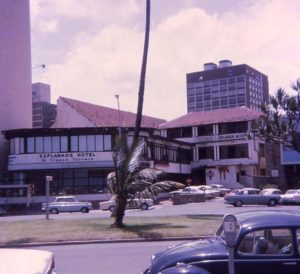 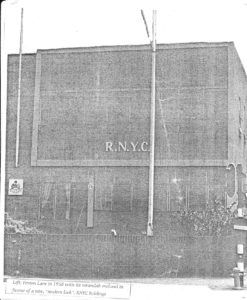 RNYC with changed frontage circa 1958.

This 1904 picture of the RNYC shows the club as originally built circa 1900s.   By the 60s the whole frontage was remodelled.  The RNYC was to an extent an exclusive club with strict rules.  I do recall one rule though was that if you were a University student you had access to the club.  A friend of mine had that privilege and we used to make use of the excellent snooker tables they had.  I have no idea what the elaborate flag pole shown in the picture was used for.  It appears to have a platform at the top.  The one way road coming down from Smith Street is Fenton Road. The 1938 directory indicates that the RNYC was separated from the Esplanade Hotel by Orange Grove.   I had not heard of this before so checked on it. From the book Origin of Durban Street Names : “ Salmon Grove runs from Smith St to Victoria Embankment –known for generations as Orange Grove the name of the little thoroughfare was changed in 1949 to avoid confusion with Orange Grove at Greenwood Park.  There were City Councillors, MJ Salmon in 1860 and AG Salmon in 1944”.

The picture does not show much of a gap between the two buildings unless it was widened and renamed as Salmon Grove later.  Be that as it may, the Esplanade Hotel next door was vastly changed.  In the 60s it bore little resemblance to what the picture depicts. The main building remained but the front was added to with a two storey addition.  Entering at ground level one went through a door way and up a very narrow staircase to a large open air semi-circular fronted verandah overlooking the Bay.   This was the Al Fresco.  It had a small bandstand and dance area and became one of Durban’s most popular Cookie Look venues.  Friday evenings it became the gathering place for after work get togethers   of office workers and young adults.  From 5pm to 7pm local rock bands provided live entertainment and being of the time, the place, to use the then term, “was rocking”.   At 7pm everyone had to leave as the Al Fresco was transformed into a more sedate restaurant.  The group I went around with met there frequently on Fridays, meeting blind dates and then going elsewhere after 7 pm.  Those were real fun times.  I have added a picture of the Al Fresco as I knew it. 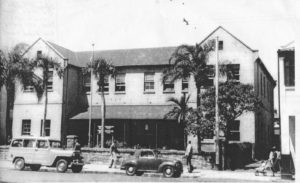 This rather plain looking building is of significant importance to Durban’s history. It is still standing today in Smith Street so I assume it is a listed building. I saw it not that long ago all boarded up but apparently intact.

It later was taken over by the South African Police and was known as the Central Police Station.

For me it was the Police Station that I reported to in 1959 when as a 16 year old I had to register for Active Citizen Force military training.  Still a schoolboy at the time, it was with trepidation that I, along with thousands of others my age, enlisted at police stations for military training that was to start in 1962.

For those not familiar with it, it stands next to Escoval House.  Anybody remember the name of the building partly shown? 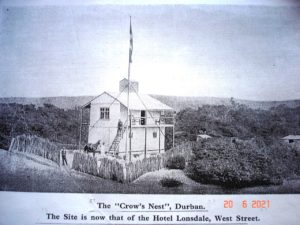 The last picture is a mystery to me.  I cannot relate to it apart from I know where the Lonsdale Hotel stands in West Street today?  What was the purpose of this rather isolated building?