Taking a cue from the Glenwood Matric Class photo posted a while back, I thought of the idea of posting Durban School Matric classes over the years. I’ve cleared it with Allan Jackson and he liked the idea. It would also create a home for the photos as stuff tends to get hidden in various posts and many drift away from the original subject. Unfortunately to post a picture you will have to send it to Allan who will add it to the site. You can contact him via Contact Us. Please restrict the class photos to Durban Schools and Matrics only . Give the date and names if possible which will make it more interesting. No doubt the photos can and probably will, attract comment and it will be interesting to see what gets posted.

The first one I am posting is the Matric Class of 1954. That is the year I arrived back in Durban to live here until leaving in 2000. I can remember the late Eddie Barth was the Head Prefect. Being a junior then, one held these seniors in awe. I will add comment on some I knew and in later years as an Old Boy and Secretary of the Marist Old Boys Association met many of them in person.

Names have been taken from a Marist Archive and what is posted may be incorrect. Please correct errors noted.

Brief notes: Jock O’Connor served as a lawyer virtually his whole working life with the firm, Browne Brodie. He managed the Pinetown branch for many years. Edward Barth took over the firm Medwoods from his father Alfred Barth. Edward built the firm up substantially. One remembers the Medwood’s vans being an olive/khaki colour green with the slogan “Around the Corner, Around the World”. Later Medwoods had the contract to move racehorses between Summerveld and the race courses in Durban and Pietermaritzburg.

Another interesting fact is that Edward’s mother, Maisie Barth negotiated the sale of David Don’s property in South Ridge Road called The Maze to the Marist Brothers when it came onto the market in the mid 1920s. David Don was member of the Natal Legislative Council, co director of Natal Estates and a noted bibliophile. His collection of Africana books and pamphlets were donated to the Durban Town Council in 1915 following his death. St Henry’s opened its doors in 1929 with the first classes being held in the house, the school buildings only being completed 1931/1932.

Continuing with this series here is the 1955 Matriculation Class. Click on photo to enlarge 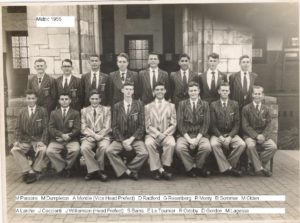 What is interesting in this photo is that all the matriculants wearing the school blazer have a flash stitched to the top blazer pocket. This became a tradition in that all matric classes thereafter sewed a yellow flash to the top pocket. This must have been the first year of this trend which was not introduced “officially” as far as I know.

Of the class if I remember correctly Mike Parsons played Natal Cricket later. The late Julian Williamson studied for the priesthood.

I do not have the 1956 Matriculation Class photo but here is the next one, 1957. Click on photo to enlarge. 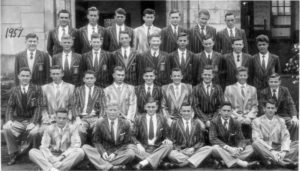 Pierre Lavoipierre entered the priesthood and served the Durban diocese. He officiated at my wedding in 1970! Pat Trimborn son of Max trimborn (of Comrades fame) played cricket for SA, Stan Pretorius was only 15 in his Matric year!!! 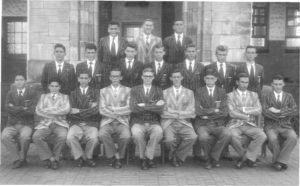 *Deceased to my knowledge.

Clive Phipson became a world ice skating champion. Joe Pieri was “knighted” by the Italian Government some years ago for his work with the Italian community in KwaZulu Natal. For many years he was very involved with the Juventus Soccer Team associated with the Italian Club in KZN. 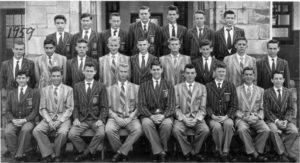 I am including a photo of the the 1959 1st Cricket XI. This team had the honour of beating Durban High School at cricket the year the star studded DHS side included players like Barry Richards and Lee Irvine. I think it was the first time St. Henry’s had beaten DHS and recall that on that Monday assembly, the team received a special accolade from the boys on their achievement. Lawrence Gibson was captain. 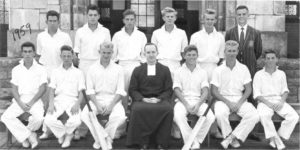 This my “first” Matric Class and was my “ Annus Horribilis”. To explain. Came the year end results and I was notified that I had not passed. I recall being away on holiday and my late sister telegrammed me with the bad news. The holiday was cut short and I returned to Durban. I remember immediately on getting back I had to decide what I was going to do so my mother and I made an appointment with the Principal, Brother Ephrem. We sat with him in his office and he laid down the choices available. Ask for a remark but if the result remained the same, I would not be accepted to repeat the year. Rewrite the examination in April and again if I did not pass I would not be able to come back to St. Henry’s. The last option was repeat the full year in 1961. Two in the class opted to repeat the year, Richard Perry and myself. In later years I was told that only five in the class had passed. I have never been able to confirm this and sadly this class had a reunion in 1961 and never again. I repeated Matric in 1961 and passed with a University Pass. I often wonder if I should not have gone for a remark but that is water under the bridge now. 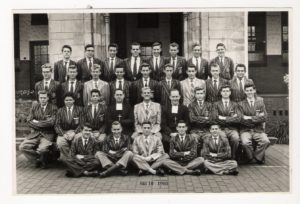 Ground : Emmanuel de Passos, Michael Byrne, Creigh Kenton, Gerald Buttigieg, Clive Hook*
* Deceased
As I said this class dispersed and we never got together again. Emmanuel de Passos was ordained a priest and is now in semi retirement at his old Chatsworth parish. Lester was Penny Coelen’s brother.

My “second” Matric was hard graft when I think back. In the languages all the set work books were different. Matric for the JMB exam was in a sense a two year course, Standard 9 and Standard 10. Set work books covered in Std 9 were carried over to Std 10 with additional ones added. This was for all languages. The other subjects had the same content. So I had to pick up on all the setwork books that the Std 9 had had. 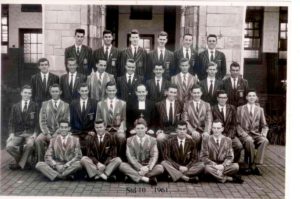 Dunstan Browne was the leader of the 60’s band Dunny and the Showmen. Anthony “Toppy” Hortop became a teacher and taught at Glenwood for many years.
This year ended my schooling with St Henry’s which covered the period 1954 to 1961. Unfortunately I did not get class photos of my early years there but some of the boys in this class were with me since 1954. 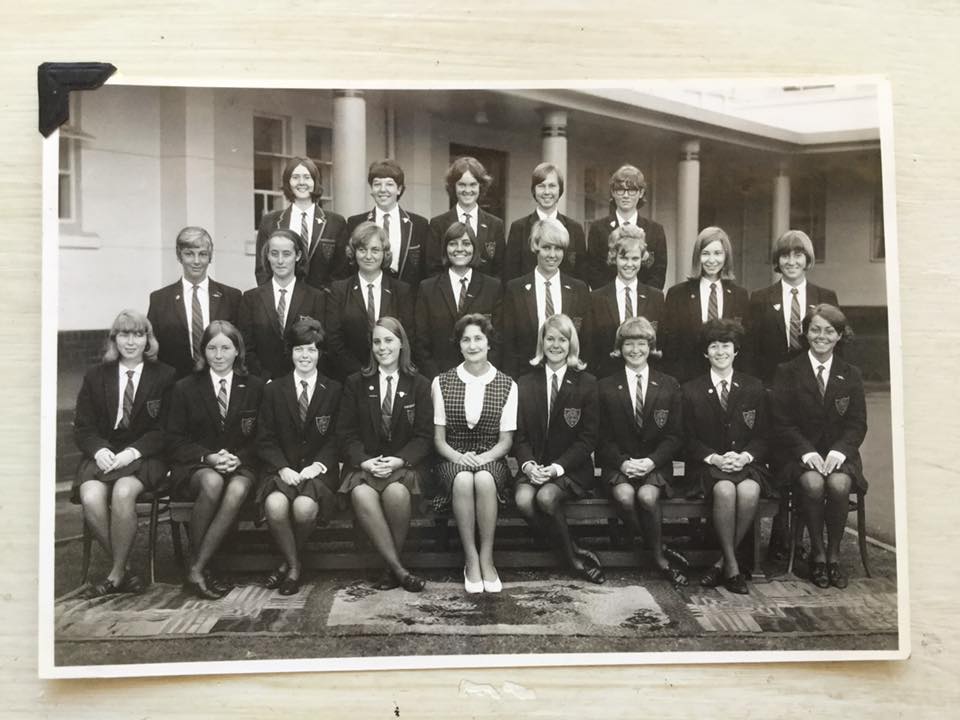 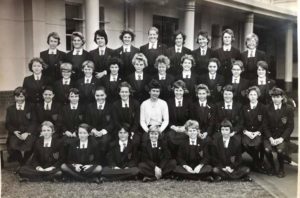