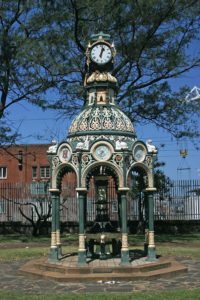 Most Durbanites are familiar with the Da Gama Clock which has stood on Victoria Embankment for many years. It has been in a sorry state for many years and was extensively vandalised but the city, thankfully, is now doing something about it. Our informant Martin Prange from the municipality Urban Design &  Landscape Planning department at the City Architects wrote in yesterday:

The vasco da gama clock has been dismantled for refurbishment under a MOU between the museums and Royal Natal Yacht club after the clock was severely vandalised – the Samson Figurine and the brass plaques were removed for scrap metal. It was decided that the clock would be temporarily moved to the Royal Natal Yacht Club as a sponsored/ supported initiative between the Municipalities Museums Department and RYNC and some of its members under the leader ship of Willy van der Vere.

The VDG Clock has been dismantled and sandblasted, missing pieces are be sand-casted of aluminium by one of the involved members. The octagonal plinth has been recast at RYNC in readiness for the structure to be painted and reassembled. The intention is to relocate the VDG Clock in a controlled environment for “safe Kkeeping” at RNYC until such time as the Point is developed and the VDG clock be relocated then to its final resting place.

Martin also wrote about other projects he was involved in: 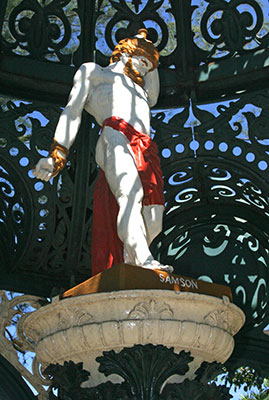 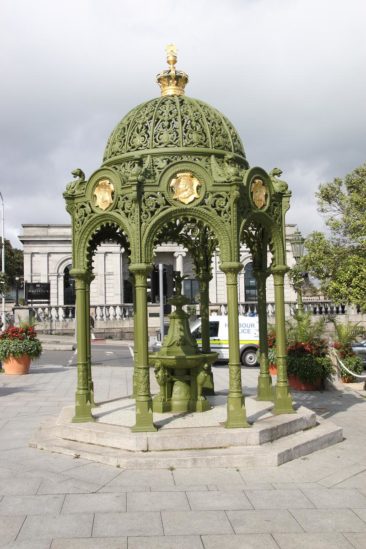 The Da Gama Clock was produced by Walter MacFarlane & Co. at their Saracen Foundry in Glasgow where they made a wide variety of components that could be mixed and matched.  We have a page on the site devoted to the clock and Currie’s drinking fountain which also documents a number of similar structures around the world with slightly different components. There’s no telling why Samson was included in the Da Gama clock in the first place but it’s good that he’ll be replaced. It’s a pity that action wasn’t taken before the clock was vandalised but at least it didn’t suffer the same fate as a similar structure in in Ireland which was almost totally destroyed in an IRA bomb attack and had to be recreated.