For those Durbanites now living in other parts of the world and who left before this project was completed you may wonder what the finished product looks like. Also, the older Durbanites who knew this area from the 60/70s will admire this engineering feat. It took a long time coming but knowing the intersections, it was badly needed. 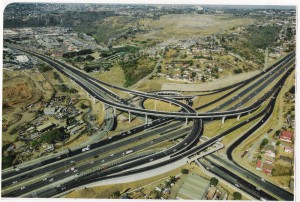 My earliest memories of this “crossing” goes back to the late 1960s when I was working on PABX Maintenance for the Dept of Posts and Telecommunications. There were three of us technicians then who were responsible for all the PABXs outside the Durban Corporation Telephone Exchange area which was bounded by the Umgeni River, the Umbilo River, the Indian Ocean and Ridge Road. All areas outside that were serviced by the Dept P&T.

At that time the vehicles we used were Morris Mini Minor Vans, not the most comfortable in Durban ‘s heat but they were nippy and you could weave in and out of traffic at times. I recall that our Workshops had made up metal air scoops which were rivetted to the doors so as to improve the ventilation. The doors only  had half sliding windows and the air intake was minimal. On the roof an opening flap was fitted to further improve the ventilation.

I must add that it was regulation then, that as we were in contact with business people we had to wear collar and tie unless of course you wore a Safari Suit which was all the rage then. As there were only three of us and the area we covered stretched from Stanger down to the Illovo Sugar Mill (now moved to Eston) and inland as far as Shongweni , there were no defined areas each of us covered. It was merely a case of reporting at a fault, fixing it, and phoning the office to be told which was the next urgent job. You could be at the Beverley Hills Hotel at Umhlanga and the next fault was at Elgin Engineering in Jacobs. I must say we were always gladly welcomed by the switchboard operators on arrival as they had to take the flak from the staff until our arrival.

This criss-crossing of Durban in a day’s work got you to know the short cuts from A to B and one of them was Quarry Road which in those days was a single two lane road alongside the Umgeni from the Springfield Flats and wound its way through the bush ending up at the entrance to Clermont in New Germany. Reservoir Hills had just started to be developed then so the road was not that well known but did make a shortcut from Durban to Pinetown.

I cannot recall the names of the roads in that area but remember driving past an Indian Crematorium. Reflecting back to those years, Quarry Road virtually started where the Britannia Hotel is, past the Old Quarry site and headed up to the New Germany area. The roads coming from Spaghetti Junction (the EB Cloete Interchange) came later.

This clear picture shows the area as it is today. What I know as Quarry Road is still there as a multi-lane highway now heading up past Reservoir Hills and Westville North to Pinetown. The roads from 45th Cutting and Spaghetti Junction which were put in place in later years when that interchange was built, are now diverted over and under and link the South and North Coast highways with a diversion to link up to the N3 route to Pietermaritzburg.

Looking at the development of the area and what I recall of it. Top centre and I stand to be corrected, the vast open area is the Bissessar (spelling?) land fill site which is accessed by the road with the row of trees. The green roofed complex in front of that is a technical college . Otherside the row of trees is the Municipal Stores and Electricity Depot. This if I recall correctly, was moved from the old Alice Street site in central  Durban which the city had outgrown.

Beyond that is the Makro complex  as well as the smaller Springfield Value Centre. These must date back about 25 years now!  In the background is the Old Quarry site covered in trees. On the left hand side is the other shopping complex and industrial park. Just above the intersection one can see a residential area and in the background the large squatter camp that has been established there. I have not been there recently but below the residential area it appears that a huge retaining wall probably made of loffelsteins had to be built.

The value of the contract was Rand 512 million and it was opened in June 2015.