I have recently received three delightful photos of an old Durban House Boat from Sue Wessels.

Sue answered a request from Derek Austin regarding his paternal grandmother’s family and in her note indicated she had a photo of the houseboat with Jim Meredith Miller standing nearby.

I contacted Sue and have received her photos. Because this is so interesting, rather than allowing it to get hidden in the topic on the Bluff, I am extracting the relevant postings from Derek Austin and Sue Wessels and starting a new thread with the hope that more people will read this article and perhaps add to it.

Personally I know nothing of this house boat called Pumula but pictures don’t lie so it existed and from what I gather it was anchored off Fynnlands.   I do know that at some stage in the early 1950s there was a Floating Tearoom on the Bay and that at Fynnlands there was a beach and picnic area amongst the trees and the mangroves which was accessible to cars. I have photos of my family picnicking there in 1948/49.

So this is the thread started by Derek Austin

” I have been doing some research on my paternal grandmothers family whose surname was Groom. Her sisters name was Mabel and here is what I found out about her so far. Jim Meredith Miller married Mabel Elizabeth Groom. Mabel and Jim were married in St Cyprians Church in Durban after coming via Transvaal back to Natal. At that time he was in the Natal Colonials and served under Baden-Powel in the Siege of Ladysmith as a Sapper /hunter and Tracker (Boer War). Mabel Elizabeth Groom born 1877 London England. Died 1937, buried West Street cemetery. Married Jim Meredith Miller who was a house porter at Durban Hospital earning £84 in 1897 according to the Natal Almanac. Mabel and Jim Meredith, who was christened so according to his Birth certificate parted company and did not divorce, she remained in Pretoria and Jim came to Durban on pension. He had a house boat built and called it Pamula and lived in it in Durban floating behind Kings Rest Station in Fynnland. He could speak 3 dialects of Indian, having served in India before WW 1 and he got along with the Shrimping community living there. Mabel refused to do this and stayed back in Pretoria.

Would anyone know anything about the houseboat at Fynnlands? ”

To which Sue Wessels replied

“Jim Meredith’s daughter was married to a great uncle of mine, Laurence Murrell. We’ve got a photo of the houseboat somewhere that I could dig up, with Mr Miller standing on the wharf next to it. ”

And here are Sue Wessels interesting photos with her comments: 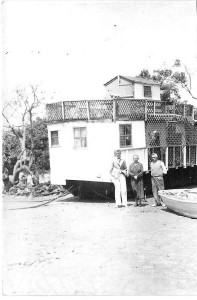 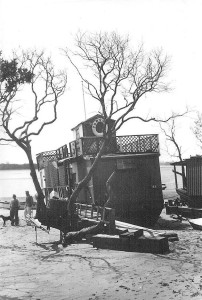 Photos of Jim Meredith Miller with his houseboat, Pumula (not Pamula). 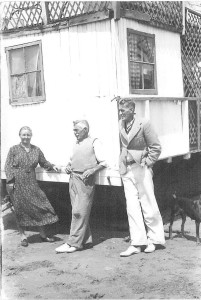 I have looked up the various people mentioned in the thread in the 1938 Directory and came up with some possible connections.

L. B. Murrell lived at 364 Stamford Hill Road. The only entry.

There are four J Miller’s but none refer to Fynnlands or a house boat.

Looking at the pictures they do look pre-war.   If anyone can add to this interesting topic please do so.