I have just stumbled on your site and wonder whether you can shed any light on Epsom Road School. The building has the year “1914” on it. It was used as an all boys school from the time of its opening until it was transferred to then Dept of Coloured Affairs, I think in the 1960s. What happened after that I do not know. However, I would like to know whether you or any of your readers is aware of any plans by anyone to celebrate the 100th anniversary of the building’s opening? I no longer live in KZN and do not have contact with many of my former school mates. I would appreciate someone pointing me in the right direction to find the requested info.

Carl Burton needs some help with a picture

Hi Allan
My G/Uncle John William Greenwood was wounded in WW1 and returned to S/Africa with wife and child. Don’t know his family home but on photo there is a tower in background in the harbour. 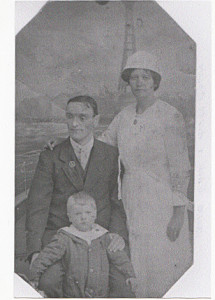 Can you identify the place? Any info would be appreciated. Thank you.
Kind regards.
Carl L Burton

I replied to Carl saying that I did not recognise the scene. I don’t think I’ve seen any pictures of a mast that size near the harbour. There was a radio mast on top of the Bluff but it didn’t look like that. I suggested that the picture could have taken elsewhere (in front of a painted backdrop perhaps)?