I know nothing regarding when school cadets were introduced at High Schools in Natal, so someone who would be some years older than I, perhaps could enlighten me. Perhaps it was a legacy of the South African War 1899-1902 but this is just a guess.  I do recall though that when I was in Standard 7  (1957) at St Henry’s, all the Senior boys partook in Cadets. Cadets were on a Wednesday and one had to don a khaki uniform – khaki shirt, khaki shorts, long school socks, school shoes –  topped with a peaked cap (not the officer type) on the front of which was a large badge of a striding Springbok and a flash underneath which read School Cadets / Skoolkadette.

One must never underestimate the power of Google. I needed a picture of the School Cadet Cap Badge… Voila! 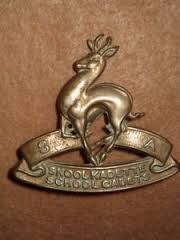 At St Henry’s, the principal at the time was Brother Ezekiel (1957-1958).  He was the master of Cadets and actually was an officer! He used to wear an Officer’s Uniform on Wednesdays complete with Sam Brown and the pips on the shoulder. I think he was a Captain. Being a rather small senior school in numbers, our Cadet Corp was relatively small but out of the numbers we managed to put together a reasonable School Cadet Bugle Band. I do not have a photo but if I recall there were about 12 buglers, two side drummers, a bass drummer, two cymbalists and about 6 (snare?) drummers who lead the band. The drum major was always a senior in Matric. The band wore boots with toe caps, and white puttees along with epaulettes, and lanyards. I must say they did look smart. Our bass drummer, Ray Ambrosini even got to wear some kind of animal skin.  On the school grounds, the military had erected a small storeroom which had a UDF number. This was known as the Armoury and within was stored all the band kit, instruments, uniforms etc.

Wednesdays, before classes started, one would see the band get together on the top field, the buglers one side, tooting away and the drummers and the rest doing their own thing in a circle. Cadets I vaguely recall was after first break and lasted about an hour or so. The cadets were divided into platoons, marshalled by lance corporals and corporals. Basically all we did was march up and down the field, and learn the fundamental commands Form Up, Right Dress, Salute, Halt, About Turn, Right Wheel. To end the Cadet session we would all march behind the band with Captain Brother Ezekiel taking the salute.

Cadets, by the majority, were generally seen as a diversion from the class room and apart from having to wear the uniform once a week, some boys hated it, it went down as no big deal. For the band members though, they had to be more dedicated because come September there was an inter school band competition which was held at the Old Kingsmead ground. The competition as far as I  know  included all Natal boys’ high schools of the time and was under the auspices of the UDF (Union Defence Force). Not being in the school band all I remember was that the trophies competed for were the Polliack Silver Bugle for the best bugler, the Polliack Mace (?) for the best drum major and I stand to be corrected but was there not a Polliack Shield for the best band? Someone can correct me about this. I never attended any of these band competitions but do recall there was great rivalry between DHS and Glenwood in my time.

To come back to my question of how long cadets were part of the school scene, I have in my possession a rather unique badge which belonged to my late father in law, Archie Black. It is the cap badge worn by the band members but this one is inscribed ” DHS 1929 Winners Polliack Silver Bugle”. With it is a plain badge of the same design, so my take is that the plain badge on his cap was replaced by the inscribed badge. Whether the inscribed badges were handed out to individual band members is unknown but more than likely. Things were done properly in those days! As far as the Silver Bugle is concerned I have never seen it nor pictures of it.  Furthermore, whether schools had Cadets as far back as 1929 I cannot say,  but obviously the school’s had “cadet bands” so one would think they did have cadets. I seem to recall that some senior schools even had shooting ranges. For pellet guns I presume. St Henry’s never had this facility.  A  point to remember is that in 1929 there was only one boys high school in Durban,  DHS, so the competition more than likely was Maritzburg College.

Coming back to Polliacks, it was a firm in Durban that sold musical instruments and most things associated with music. In the early 50s I recall it was situated on street level of a building known as Polliack’s Building in West Street, next door to Payne Brothers Building. I have checked the address and it was 408 West Street. It would appear that prior to Polliacks, a musical firm by the name of Mackay Bros and McMahon operated out of the same premises also selling music instruments and  sheet music. Polliacks then took over and that is how I remember them in West Street. Later the same premises were taken over by a firm called Bothners who also traded in musical instruments but extended their wares to include kitchen appliances, sewing machines, hi fi equipment and even photographic equipment.

I have since found out that Payne Bros. in fact were the owners of the Polliack Building, this probably roundabout the early 50s and they leased out the ground floor store. In early 1954, Paynes planned a major extension of their department store which included incorporating Polliacks Building into the main building. This was completed by 1957 and Paynes Building emerged as the tall central tower with the adjacent large wing on the left. The store had been completely remodelled to include the next door building and the building remains in that format today. In 1969 Payne Brothers celebrated their 100 years of service to the people of Durban. Just prior to the Centenary,  the whole store was refurbished, a central new escalator was installed and the decor throughout beautifully designed. I recall it called itself “the most beautiful store in Africa” and adopted a very modern stylized light blue ” P ” as its brand.

Polliacks continued trading in musical goods but  moved to premises at 28 Stanger Street. They also moved over to being wholesalers. They virtually dropped the music side of the business and  concentrated on household appliances. I looked them up in the latest Durban phone directory but notice there is not a single Polliack listed. Bothners as well went more into large and small household appliances and they too have disappeared.

Sadly in later years, the disintegration and migration of the CBD to the various new malls, La Lucia, Westville, Pinetown, Pavilion, Umhlanga, et al, saw the CBD lose it distinctive character and appeal. Paynes became a GAME outlet and the beauty that once was Paynes was gutted out and consigned to history.

Back to the original topic!  One wonders what happened to the Polliack Silver Bugle etc. Perhaps someone who participated in the band competition in later years can indicate the date which will give a timeline. Where are these trophies today?  As far as Cadets at St Henry’s is concerned, they ended as far as I remember round about 1958.  This may have been a decision taken by the Brothers, the school being privately owned but I have a feeling that it was a Natal Education decision to put an end to Cadets at all schools for it disappeared altogether.

The above two pictures will only relate to old St Henry’s boys.  If they wonder whatever happened to the Armoury here are recent pictures of the building showing what it is used for today. In my time the lean to was not attached.

I understand these days one well known senior boys high school has an “armoury” of its own where “weapons” are handed in for safe keeping prior to proceeding to the classrooms.  Need I say how times have changed!

PS. I contacted a school friend and class mate,  Derek Wilkes and he kindly sent me a picture of the St Henry’s School Cadet Band taken probably 1957.  The photo was taken at Old Kingsmead during the Band Competition for that year.  I cannot remember all the names but at athe back, the Sergeant buglers are David Hayden, Johnny Jerome and the late Rob Archibald. The bass drummer is Ray Ambrosini  with buglers the late Norman Taylor and late Rob Taylor . I suspect the bugler with glasses could be Dunstan Browne (later known as Dunny and the Showmen). Sergeant Derek Wilkes is the drummer on the left. Anyone fill in any other names?