I have a few more things for you today including the following from Derek Levy:

I have strong memories of attending Cookie Look hour (5.00pm-7.00pm) at Claridges Hotel over the July holidays. The reason for my being in Durban was for my late father to attend the Durban July. The winner that year was Numeral ridden by jockey Raymond Rhodes.

As for the music, it was crazy. The Beatles had just started to invade the planet and the album “Please Please Me” had just been released. The resident band playing every night was Ricky Pelling’s band and Mercia Love*** was doing most of the singing. Not sure who the pianist was but he nailed singing “all my loving ” on a nightly basis. Ricky Pelling was very special and you had to arrive at least an hour early to get a decent table as the the room on the first floor was packed every night.

As an 11 year old this was an amazing experience. I recollect drinking cola tonics and receiving hot free peanuts from the kitchen and then then going on to a place called Kenilworth [an amusement arcade] with 50c to try and get the popular pinball machine. The challenge was to win free games so as to lay claim to the machine for a period of time.

Then came December 1967 with The Flames and Alfresco at the Esplanade Hotel. What a life-changing experience. Ricky Fatah, I guess, was only 14 at the time and the Flames made life worth living. Burning Soul was the album and the rest is history.

We were all very fortunate being teenagers at a special time.

*** I was fortunate to be able to interview Mercia Love in 2011 and will make every effort to get that written up and posted on the site as soon as possible. I also have some recordings of her performing at the Los Angeles Hotel and will try to post a sample if the copyright can be untangled.

Reader Emmie had the following to ask:

In the late 50S and beginning of the 60s, Sol Kerzner’s family had a hotel in Gillespie Street which had the first DISCO in Durban. It was called THE Back Room. Sol ran this for his parents. He always some fun things to do and some great prizes.

Does anyone remember the Back Room?

Reader Stephen Hall, in reply to earlier posts on Mansfield School, had this to say:

I attended Mansfield Boys High and recall many happy days participating in the Cadet Band and in Drama under Dave Matheson. I am an executive with a large Australian Bank based in Sydney, and owe a lot to the school that taught me so much about life.

Michael Unterhalter remembers a variety show on the beachfront. I have an idea that the venue might have been the original Little Top (a blue and white tent) but would welcome additional information:

No mention on the site as yet of the variety show that took place at South Beach area. It was open air and the “main man” was Bill Brewer. It took place in the evenings once or twice a week. The approximate location was on the beach front in line with the Fairhaven hotel. This memory goes back to +- 1948 and into the 1950’s.

And finally, for today at any rate, I have a question from Alan Fairleigh about a picture that had been on the site for a while. I apparently didn’t have a very close look at it because I didn’t realise that it was taken in Gardiner Street.

It was taken more or less on the corner of West Street and Gardiner Street looking towards Smith Street. But then, what is the large large white building and the one under construction next to it? Isn’t that where the Royal Hotel should be? 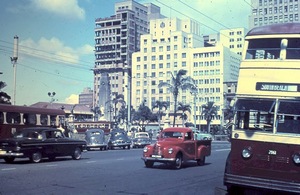 I’m afraid the picture quality isn’t great and would appreciate it if anyone had a larger version. Alan thinks that one of the cars pictured may be ND11, which was his when he had offices in Prudential Building.