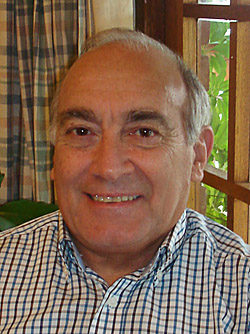 I was born in Alexandria Egypt and arrived with my mother and sister as a five year old at Durban’s Outer Anchorage in the Lloyd Trestino ship, Toscana on 3rd September 1948. It was not a good trip for having left Port Said, (on my birthday in fact!), the journey was beset with problems of typhoid on board. Some passengers died en route and had to be buried at sea. On reaching Durban, the ship was put into quarantine and only allowed into the harbour a day later as some passengers were still critically ill.

My working career was wholly spent with Telkom which I joined just before starting my 9 months military ACF training. I probably lived through the most exciting times in the telecommunication field for when I joined, the network was still pre World War 2 , the old “Number Please, Nommer Asseblief” system still in operation for all trunk calls which had to be booked. Technology then quickly went through various phases and I was involved with the installation and commissioning of some large telephone exchanges in Durban which were necessary to replace the old electro-mechanical systems and meet the expanding demands of a growing city. Then came the computer age and the complete shift to digital switching, followed by the mobile phone revolution.

Working in telecommunications allowed me to travel around most of Durban getting to know it fairly well and going to interesting areas. In later years, I travelled to many parts of KwaZulu Natal heading a Special Investigations Section sorting out various telecomm problems. I have always been drawn to Durban’s past history, probably abetted by the fact that my old school is an old Durban historic landmark and the school bounded Cato Manor with its own history. My late father in law was a Durban boy, born and bred, who had a singular affection for Durban and added to this, was that my late mother in law was of pioneer stock being part of the Isipingo Mack family. Both added immensely to my Durban interest as they lived in and about Durban when it still had its old world charm and beauty.

So it has been an interest that has grown over the years and blessed with a fairly good memory, when Facts about Durban appeared on the internet, it became an outlet I really enjoyed and which I could relate to. My association with Allan Jackson goes back to 2003 when he published the first edition of Facts about Durban. I wrote to him to correct a statement in his book about Durban’s telephone network and we have been in touch virtually ever since.

Durban is much changed now from what it was in the early 1950s when my family settled in there. So much has disappeared and changed that sadly is not recorded and all we can rely on now are old postcards, photographs and our memories. That is why I feel it is good to record the past, for what is not written down and recorded can be deemed to be lost for ever. I hope many will recall their reminisces of Dear Old Durban as Barbara Maude-Stone called it, and put down their memories on this great informative website.

Gerald’s contributions to the site include his memories of growing up in Durban in the 1950s & 1960s including Sessions, Going Fishing & School Breakup Day, St Henry’s first soccer team, What did you do for fun in Durban?, Bakeries and Dairies of Durban and he contributed extensively to The way we were page.

His diary entries will appear in the body of the diary, as they made, and will also be listed on their own page. Ed.